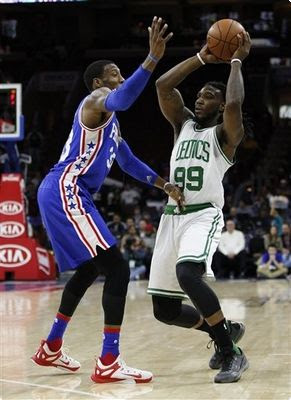 The Celtics grabbed a first-half lead against the 76ers and held on tight in a 112-92 win in Philadelphia on Sunday.

The game that was originally scheduled for Saturday night but was pushed to Sunday due to Winter Storm Jonas, which hit the city of Philadelphia with nearly two feet of snow.

In a quarter where the Celtics shot 64 percent, the C's grabbed a 29-point lead midway through the third quarter and held a 20-plus or more point lead throughout the night. The 76ers defense couldn't slow down the Celtics' offense and couldn't put together a run while committing 23 turnovers.


"I thought our guys were pretty locked in today," said Celtics coach Brad Stevens. "We talked about playing with force all day, and I thought we did a pretty good job of that." [Associated Press]

The Celtics scored a whopping 94 points in 36 minutes, topped off by their 36-point third quarter. Their fast-paced offense was too much for the 76ers to handle as the Celtics finished the night with 25 fast break points.

Next stop on the road for the Celtics will be the Washington Wizards on Monday night. Two weeks ago, the Wizards lost to the Celtics by only two points -- the Wizards will certainly seek revenge on Monday.

The Celtics scored 25 fast break points and outscored the 76ers, 50-44, in the paint. The Celtics also continue to shoot well from distance where they shot 44 percent on 11-for-25 shots.