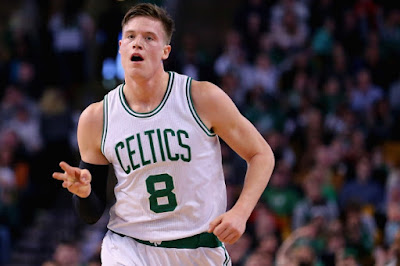 The Celtics' second unit combined for a whopping 62 points in a 113-94 win over the Magic at TD Garden.

In the second half, the Celtics bench crew led the charge against the Magic. Olynyk, Smart and Turner led a 26-6 run and opened up a 27-point lead in the fourth quarter. Jae Crowder's 15 points led the starters and Jared Sullinger (11 points, 11 rebounds) notched a double-double but it was the second unit's scoring that took away Orlando's hope of making a comeback.

Celtics led the Magic for most of the night and took an 86-77 lead into the fourth quarter. The big run (26-6) that ended up being the difference in the game began towards the end of the third quarter and carried into the final frame where the Celtics dominated -- outscoring the Magic, 27-17.

Kelly Olynyk and Marcus Smart each scored 16 points and led seven Celtics in double figures. Evan Turner chipped in 15 points and eight assists and Jonas Jerebko (13 points, 10 rebounds) had a double-double off the bench.


"I thought that they were the difference in the game," Celtics coach Brad Stevens said about the Celtics bench. "They're playing well together. Each of those guys is doing a lot right now really to play to their strengths. It's been good."

The Magic had six players score in double-digits. Nikola Vucevic scored a team-high 14 points and Shabazz Napier added 13 off the bench. However, the Magic couldn't counter the Celtics' 26-6 run in the second half. The Magic have now lost eight consecutive games.

Celtics (27-21) have won five in a row and are now tied with the Hawks for fourth place in the Eastern Conference.

The Celtics will finish their home-and-home series against the Magic at Orlando on Sunday. The C's will look to stretch their winning streak to six while the Magic hope to snap an eight-game skid at home.

Celtics crushed the Magic in the post -- where they scored almost half of their total points. Celtics outscored the Magic, 50-32 in the paint. They also continue to shoot well from distance -- the C's shot 41.7 percent while knocking down 10-of-24 of their 3-pointers. It's the fourth straight game the Celtics have shot 40 percent or better from behind the arc.