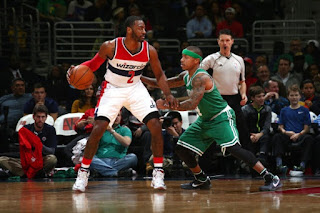 For the fourth time this season, the Celtics defeated the Wizards -- sweeping the season series and did it in a blowout fashion in a 116-91 win on Monday.

After a back and forth first half, the Celtics built the first double-digit lead of the night in the third quarter and took a 84-70 lead into the final frame. Celtics defense converted 21 points off of 14 Wizards turnovers before they grabbed their biggest lead of the night in the fourth quarter. After Wizards forward Nene was whistled for a Flagrant 1 foul, the Celtics opened up a 27-point lead behind a 23-7 run.

Isaiah Thomas scored a game-high 23 points and led six Celtics in double-figures, including Evan Turner who finished the game with 18 points and five rebounds. Otto Porter and Jared Dudley each scored 15 points to lead the Wizards.

Monday night's game makes the ninth straight game in which the Celtics have scored 100 or more points. Celtics (25-21) are now one game ahead of the Pacers for fifth place in the eastern conference.

In three days, the NBA All-Star reserves will be announced and Isaiah continued to make his case for a spot on the Eastern All-Star team. The potential all-start finished the night with 23 points on 8-for-14 shooting, had nine assists and grabbed four rebounds. He was a plus-19 on the night. Monday night's game maked the 31st time Thomas has scored 20-plus points this season.

Fortunately for the Celtics, John Wall wasn't the best Wizard on the floor. Wall had a bad shooting night. He shot 27.3 percent on 3-of-11 shooting and couldn't stop the bleeding when the Celtics offense erupted in the fourth quarter. Not having Bradley Beal in the game also didn't help the Wizards offense. Beal exited the game with a bloody nose in the second quarter and never returned.

The Celtics shot 48.9 percent from the floor on 44-of-90 shooting. They finished with 42 points in the paint and shot 40.9 percent from distance on 9-of-22 attempts. Celtics offense has been hot lately and it starts on the defensive end of the floor. The C's coerced 20 Wizards turnovers and sealed the win in the second half behind 63 second-half points.