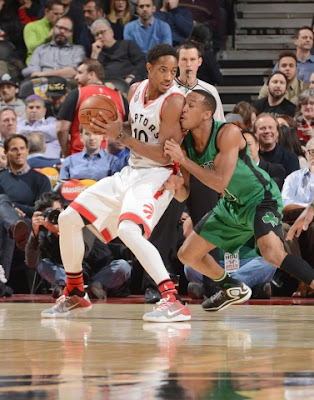 After the Raptors opened up a 13-point lead in the first half, Celtics coach Brad Stevens turned to his bench, but it wasn't enough to counter DeMar DeRozan who scored 22 second-half points en route to a 115-109 Raptors victory.

The Celtics closed the first half on a 10-2 run and took a 62-56 lead into halftime. Led by Olynyk's 18 points, the Celtics bench combined for 27 points. Yet, DeRozan erupted for 18 third-quarter points and set the tone offensively for the Raptors as they outscored the Celtics, 40-28, before heading into the fourth quarter.

In the final frame, the Raptors led by four points when Isaiah Thomas committed a costly turnover on an inbound play out of a timeout with 41 seconds left. The Celtics were able to regain possession but Avery Bradley's missed 3-pointer with 14.8 seconds left, pretty much sealed the win for Toronto. It was the fifth missed 3-pointer of the quarter and further prevented the Celtics from regaining the lead that they saw slip away after halftime.

The Raptors did an excellent job of getting to the hoop while knocking down good looks from the perimeter -- they outscored the Celtics 54-38 in the paint and shot 55.4 percent on 46-of-83 shooting. Although the Celtics shot 50.6 percent from the floor, it wasn't enough to impede DeRozan's second-half outburst. The Raptors never led by more than six points in the fourth quarter, but were able to pull away in the final minutes.

DeRozan gave the Celtics one the best individual performances they've seen from an opponent this season and did it in a number of ways. He drove the ball to the hoop, stroked it from the mid-range, got to the free-throw line (8-of-9) and lit up the C's -- scoring 30 points in three quarters. Who does that? Not a lot of players in the NBA do. DeMar was ridiculous. He finished the night with six assists to go with his 34 points.

The Celtics starting front court struggled defensively and no player looked worse than Jared Sullinger. Jared had an ugly outing in Toronto. He couldn't find his offense and was bullied by Valanciuas and Luis Scola -- who scored and grabbed rebounds over Sully throughout the 12 minutes he was on the floor. Sullinger went scoreless on 1-for-7 shooting, committed two turnovers and was a team-low minus-19 on the night.

The Raptors entered the game as one of the league's worst teams in defending 3-pointers and it showed. Celtics shot 46.2 percent from deep on 12-of-26 shooting but needed a few more down the stretch when they counted most. The Celtics utilized their 3-point shooting throughout the game to keep themselves within striking distance and eventually grabbed a lead but couldn't hit the big ones at the end of the fourth quarter. As the saying goes: "You live and die by the 3," well the C's lived by it for 36 minutes as the 3-ball certainly kept them close until the last quarter where they went 1-for-6 and ultimately suffered their second straight loss.

The Celtics hope a little home cooking will shake their funk when they face the Bulls at TD Garden on Friday.

The Celtics have to do a better job at defending the post. In a game where Sullinger only played 12 minutes, the Celtics had no other big men to count on for interior defense. Amir Johnson and Tyler Zeller struggled to keep up with Valanciunas and Scola nor could they get stops against Toronto's perimeter players as they were able to get to the hoop with little resistance.