Inconsistent C’s the Theme of 2016 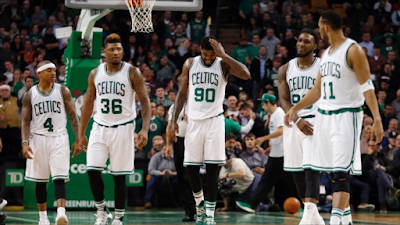 After another maddening home defeat to the Detroit Pistons and many Celtics faithful are left with that bitter taste of mediocrity in their mouths. Boston led by as many as 13-points against an improved Pistons roster of second tier stars (much like the C's themselves) and ultimately dropped another game that they have no excuse for losing.

Frustration and annoyance aside, the loss leaves me wondering why this Celtics team is incapable of holding solid leads into the second half of games, namely, home games. While the answer is likely a combination of things, the solution might be an unorthodox one. Boston seems to go ice cold in the third periods of games and come out mildly flat to start second halves. Solution? The “All Energy Lineup.” Boston is loaded with players who have defined skill sets and some thrive off playing with energy. I say, why not let this group lead your second half and set the high energy tone for the remainder of the game?

The lineup would look something like: Isaiah Thomas, Marcus Smart, Avery Bradley, Jae Crowder, and Tyler Zeller. Of course this group, once healthy would be implored to press on the perimeter and force teams to play fast. Quick switching and double teams on the ball would be a must and Zeller would be the only player over 6'6'' in the lineup to protect the basket but the energy should (and would) be enormous. Even if the group wasn’t scoring, the energy and tone for the second half would be starting at a high and allowing the more skilled scorers to come in and play a theoretically tired opposition. I can admit the idea is a theory at best and would only be temporary if unsuccessful but the injection of energy from the start of the half would be electric and afford Boston no excuses for lame second half starts.

Ultimately, the Celtics consistency or lack thereof, is a much bigger issue with a roster that still lacks a go-to-presence in its starting lineup and only one player who can consistently beat his man off the dribble; which is Thomas. Without a clear cut trade partner emerging for a Boston team that is dying to find its next go-to-guy, we may want to get used to the idea of the solution for the inconsistency being more experience with the current roster… stay faithful Green Team.