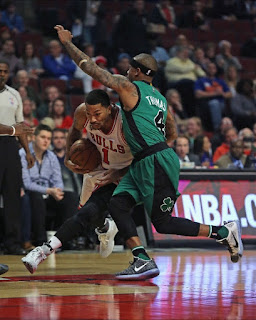 On a night where the Celtics were held to only 35.7-percent shooting, the Bulls took advantage  by erasing a 10-point deficit, took a 48-47 lead into halftime and never looked back as they beat the C's 101-92 at the United Center on Thursday night's nationally televised game.

"When our players play at our highest level, we're a really good team," Gasol said.

Boston got out to a great start leading 41-31 halfway through the second quarter before it came undone. Seven players ended their night's scoring in double-figures. Jae Crowder finished with 17 points and Kelly Olynyk added 16 points and 9 rebounds. Isaiah Thomas scored 14 points while Jared Sullinger notched a double-double with 13 points and 11 rebounds off the bench in the C's fourth loss in the last five games.

The Bulls jumped out on a 13-2 run to begin the third quarter, and the Celtics finished the period shooting 7-of-32 from the field, the C's were down 74-63 at the start of the fourth. Thomas went ice cold (5-17 overall) while Boston never got into any kind of rhythm offensively the rest of the way.

"They played great defense," Sullinger said. "But we have to turn back around and get back on our high horse and get back to running our offense the way we should."

Brad Stevens missed this TNT televised game to visit former Butler center Andrew Smith, who has been diagnosed with Hodgkin's lymphoma and was scheduled to undergo a bone marrow transplant on Thursday.

"I was obviously thinking about Brad and wanting to represent him well and our players to do right by them," said Celtics assistant Jay Larranaga, who filled in for Stevens. "They worked really, really hard. They're traveling all over the place. Played last night (Wednesday), really, really tough game."

Celtics are coming off back-to-back losses, the first of the season as they fell to the Pistons at home on Wednesday night as well.

Boston will have a few days to get back into the swing of things as they travel to Memphis to take on the Grizzlies on Sunday. Tip-off is at 6:00 PM EST on Comcast Sports Net New England.

Despite the C's forcing 16 turnovers (11 steals led to 17 points), they only shot 5-of-25 from behind the 3-point arc. David Lee continues to add to his DNP's as he did not see the court on Thursday. Avery Bradley missed his third game in a row with a hip injury. He looks to possibly be back in the lineup come Sunday.