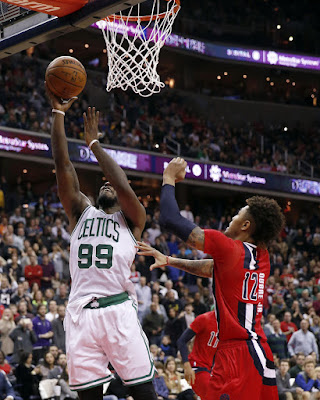 The Celtics began their three-game road trip on a positive note by beating the Wizards 119-117 in Washington, D.C. on Saturday.

The Celtics outscored the Wizards, 54-56, in the second half, erasing an 11-point deficit and grabbed a four-point lead (114-110) with 30 seconds left in the game. With 22 seconds left, John Wall was fouled shooting a 3-pointer. After missing his first attempt, NBA official Tony Brothers handed Jae Crowder a technical foul for yelling toward the Wizards bench. Wizards guard Gary Neal converted the technical foul shot and Wall made 2-of-3 to pull the Wizards to within one point.

After Amir Johnson split a pair from the foul line with 15 seconds left, Garrett Temple converted a pair of freebees to tie the game at 117. Out of a timeout, Celtics executed a back door cut play to Crowder for the go-ahead layup. Wall only needed 3.9 seconds to go coast-coast, but he missed an uncontested layup that would have sent the game into overtime.

After the game, Crowder told CSNNE that it was Wizards coach Randy Whittman who initiated the exchange of words that resulted in him getting the technical foul. Whittman did not comment on the incident.

Isaiah Thomas (36 points) and Crowder (22 points) combined for 54 points to lead the Celtics. Wall scored a game-high 36 points and Marcin Gortat (18 points, 11 rebounds) had a double-double for the Wizards.

Crowder has been playing at a very high level lately and Saturday was no different. Crowder scored 22 points on 9-of-18 shooting, including 2-for-5 from deep to go with his eight rebounds and six assists. In the last four games, he's averaging 21.2 points, six rebounds and shooting 55.2 percent from the floor.

Crowder's late-game technical foul could have ultimately costed the Celtics the game. Although Crowder made the mistake of talking back to Wizards coach Randy Whittman, NBA official Tony Brothers' call was a bit extreme.


"I feel like he was getting away with a lot of curse words and inappropriate words to me, and I retaliated and I got hit," Crowder said about earning the technical foul. "That said he didn't hear anything from Whittman, I'm not going to outburst on a coach and say something like that for no reason." (AP)

Crowder never received a warning from the veteran official, and the controversial call led to the Wizards eventually tying the game before Crowder's go-ahead layup put the Celtics up for good.

The second stop on the Celtics' road trip is Dallas. The C's will try to make it four wins in a row against the Mavericks on Monday night.

The were constantly making trips to the free-throw line and it paid dividends. They shot 11-for-12 in the fourth quarter -- 32-of-36 on the night (89 percent), including 3-for-4 in the final minute. If the Celtics can reach this plateau more often, it will better their chances of edging out wins in close games. The C's shoot 77 percent from the line on 22.7 attempts this season.