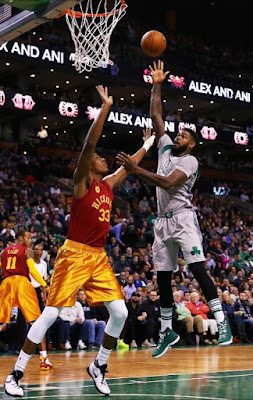 In only the second win of 2016, the Celtics snapped a season-high four-game losing streak by beating the Indiana Pacers 103-94 at the TD Garden.

Boston avoided going under .500 when they capped the fourth quarter with a 12-0 run in the final 1:46, a run where they converted four steals into easy layups.

"Get stops. Hunker down and get stops," Jae Crowder said. "We got a couple steals in a row. I think that's what it was. We didn't do anything differently on offense. We just hunkered down and got stops."

Isaiah Thomas, who was coming off of two back-to-back 30-point games (69-career total), led five Celtics players in double-figures with 28 points on 9-of-18 shooting. Crowder finished with 25 points (tied a career-high), while Amir Johnson added 14 points and grabbed 18 rebounds in the C's first win in nearly 10 days.

The Pacers were led by Paul George, who struggled from the field (7-of-20), and ended his night with 23 points. George Hill chipped in 13 points, while Monta Ellis contributed with 12 points and four assists in the loss. Indiana is now 22-17 and are tied for fifth in the eastern conference playoff picture with Miami.

The Celtics got off to a bad start, falling 8-0 early in the first quarter before catching fire and going on a 22-2 run. Midway through the second quarter the C's pushed their lead up to 40-28. By halftime, Boston went into intermission with a 57-49 advantage.

In a back and forth third quarter, Indiana looked to take over the game as Paul George (17 points in the period) went 5-for-7 from the floor including hitting two 3-pointers. With just over two minutes left in the fourth, the Pacers led 94-91 before they turned the ball over on consecutive possessions which led to four straight points, giving the Celtics a one-point lead with 1:32 to play.

"That was the game. Give them credit for getting up and pressuring us," said Pacers coach Frank Vogel. "That's what they do."

Indiana still had life when George stole a Marcus Smart inbound pass but Crowder stole the ball right back, slamming home an uncontested dunk and pushing the home team's lead for good; 99-94 with 32 seconds left.

"Our defense, those four layups or three layups, whatever it was, were the turning point for us, " Boston coach Brad Stevens said.

The Celtics are now 20-19 and a half game behind the eighth seeded Magic. They will return to the Garden again on Friday night to host the Phoenix Suns. Tip-off is at 7:30 PM EST.

Brad Stevens reinserted Jared Sullinger (4 points, 20 minutes) back into the starting lineup replacing Kelly Olynyk (11 points, 15 minutes) after the Celtics went 1-4 in the last five-games. The C's playing on national TV (ESPN) for the second time in seven days, shot 44-percent overall from the field, while forcing 17 turnovers (7 steals) and turning them into 23 points.

Before Wednesday night's tip-off, there was a moment of silence for former Butler center Andrew Smith, who lost his battle with cancer on Tuesday. Smith played on the two teams Stevens coached in back-to-back NCAA title games.