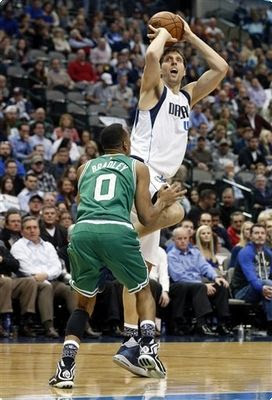 It was a game of two halves. And an overtime.

The Celtics overcame a 17-point deficit, converted clutch fourth-quarter baskets and forced overtime -- where the Mavericks knocked down four 3-pointers to beat the Celtics in a 118-113 win in Dallas.

The Mavericks took a 29-16 lead into the second quarter and extended it to 17 points -- their biggest lead of the night. Dallas shot 48.8 percent in the first half. The Celtics rallied in the third quarter, outscoring the Mavericks, 33-18 and went into the fourth quarter up, 72-70. Isaiah Thomas, who scored two points in the first half, found his offense in the third quarter by scoring 12 points on 5-of-6 shooting.

In the fourth quarter, Dirk Nowitzki caught fire -- he scored 14 of his 31 points and propelled the Mavericks to a five-point advantage after converting a four-point play with 1:27 left in the game (89-84). However, the Celtics didn't quit. They went on a 6-4 run to set up a chance for them to tie the game, down by three (98-95). With 14 seconds left, Jae Crowder was fouled shooting a 3-pointer and converted all three free-throws to send the game into overtime.

The Mavericks needed four 3-pointers in the extra period to fend off the Celtics. Dallas finished the night 16-of-34 from distance -- where they shot 47 percent on the night.

Smart did a little bit of everything. He scored (20 points), grabbed boards (eight rebounds) to help get the fast break going (31 fast break points) and finished the night with two steals. Smart also hit a big 3-pointer in overtime to pull the Celtics to within one point before Deron Williams and Nowitzki hit back-to-back 3's to extend the Mavericks lead up to four.

In a game where Pachulia pulled down 19 rebounds, the Celtics could have used some help from their 6'9" big. Amir Johnson finished the night with just two rebounds and a turnover in 13 minutes. When the Celtics made their second-half comeback, coach Brad Stevens knew he wasn't going to get much rebounding from Johnson so he kept him on the bench for the rest of the night.

After the Celtics grabbed their first lead in the third quarter, the Mavericks turned to Nowitzki for help and he delivered -- he scored 21 of his 31 points in the fourth quarter and overtime. When it came to defending Nowitzki, the Celtics often found themselves caught in a switch, which led to easy jumpers for Dirk. In the fourth quarter, Nowitzki knocked down shots over Smart, Evan Turner or another undersized defender, which led to easy shots or trips to the free-throw line -- where he went 12-for-13 on the night.

The Celtics couldn't stop the Mavericks from knocking down 3-pointers, especially in the overtime period. Dallas drained a handful of contested 3-pointers (4) in the extra period but the Mavericks also made a lot of open 3's throughout the night. The Celtics back court were caught behind screens and often late on defensive switches, which led to open looks for the Mavericks. Nowitzki (3-for-5), Chandler Parsons (3-for-5), Wesley Matthews (3-for-8), Devin Harris (2-for-5), Deron Williams (2-for-5) and Raymond Felton (1-for-3) all took turns knocking down jumpers from downtown.