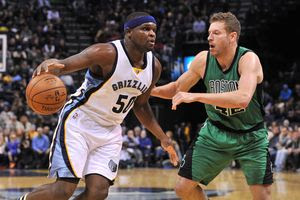 The Celtics blew a 21-point lead in the fourth quarter, surrendering their third consecutive loss in a 101-98 Grizzlies win.

In what may have been the Celtics' best first quarter of the season, the C's went on a 19-1 run and outscored the Grizzlies, 34-16. The Celtics built a 21-point lead in the third quarter but Memphis managed to chip the deficit down to eight points before heading into the fourth quarter.

Midway through through the final frame, the Grizzlies went on a 10-2 run to grab their first lead of the night. Memphis opened up a 99-94 lead with 17 seconds left in the game.

Isaiah Thomas and Mario Chalmers exchanged a pair of free throws before Thomas was fouled driving to the hoop and knocked down another pair from the charity stripe -- making it a three-point game. With three ticks left and the Grizzlies out of timeouts, Thomas stole Memphis' inbound pass, handed the ball to Avery Bradley from the ground for a chance to tie the game but Bradley's 3-pointer came up short. Thomas even made a 3-pointer shortly after Bradley's attempt but the shot clock read zero while the ball was still in Thomas' hands.

Thomas expressed his frustration after the game.


"It's frustrating because we ended up losing," Thomas said. "I don't know what it is. We find ways to lose. You have to give credit to Memphis. They grinded it out.

Behind rebounding and converted free-throws, Memphis outscored the Celtics 33-22 in the final frame. The Grizzlies scored 15-of-15 foul shots and controlled the glass by out-rebounding the Celtics, 58-39

The Celtics have now lost five of their last six games. C's will travel to New York to face the Knicks on Tuesday before they host the Pacers at TD Garden on Wednesday.

The Grizzlies pulled down 21 offensive rebounds. Randolph grabbed a team-high (8), Allen and Matt Barnes each had four. These second chance opportunities helped the Grizzlies make their comeback in the second half.