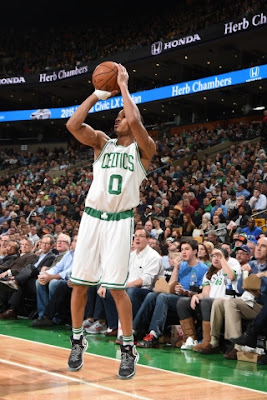 Forcing a total of 21 turnovers, the Celtics led the Nuggets throughout the final three quarters en route to a 111-103 victory at TD Garden.

After three quarters, the Celtics scored 15 second-chance points off of 13 offensive rebounds and took an 86-71 lead into the fourth quarter. Celtics topped an 18-2 run in the final frame to open up a 22-point advantage -- their biggest lead of the night. Celtics bench totaled 40 points and took care of the lead while the starters rested.

Avery Bradley scored a game-high 27 points and Isaiah Thomas added 16 points and five assists. Danilio Gallinari and Will Barton each scored 23 points to lead the Nuggets.

The Celtics (26-21) have now won four games in a row -- tying a season-high and puts them half a game behind the Bulls for fourth place in the Eastern Conference.

After Avery Bradley scored 13 first-quarter points on 5-of-7 shooting, including 3-of-5 from deep, you knew it was going to be one of those shooting nights for him. The Celtics shooting guard shot 55 percent on 11-of-20 shooting, including 5-of-13 from distance and tallied 27 points. Defensively, Bradley was a pest in the back court and finished the night with four steals.

Every Celtics played a role in the Celtics' win in one way or another. Jared Sullinger and Amir Johnson combined for 24 rebounds, Bradley and Thomas led in scoring and the bench picked up the slack. Kelly Olynyk's 17 points (2-for-3 from deep) led the bench (40 points) and Marcus Smart's stifling defense earned himself three steals as he finished the night with a plus-11 rating.

Although the Celtics held a comfortable lead throughout most of the night, they missed a flurry of points in the paint. The Celtics shot 42.7 percent from the floor but could have finished the night with a higher percentage if they were able to convert the majority of their layups.

The C's will have a chance to grab fourth place in the east at home on Friday when they begin a back-to-back, home-and-home series against the Magic.

The Celtics defense set the tone in the first quarter when they forced seven Nuggets turnovers and carried that same intensity for four quarters. Celtics finished the night with 15 steals and scored 24 fast-break points against Denver.