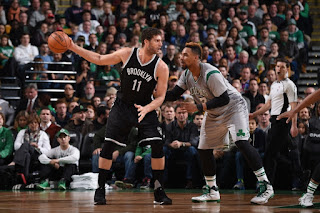 For the second game in a row, the Celtics' lost at home against one of the league's bottom feeders in what was one of the most disappointing defeats of the season.

The Nets beat the Celtics, 100-97, and considering Boston owns Brooklyn's first-round pick, the C's didn't do themselves any favors by suffering their second loss at the hands of Brooklyn in 2015-16.

Throughout a dreadful third quarter, Celtics coach Brad Stevens tried every lineup combination he could think of to spark some sort of offensive rhythm -- but nothing seemed to work. The Nets (10-23) outscored the C's 25-16 in the third quarter and carried a 10-point lead into the final frame. Behind an 11-2 run, the Celtics tied the game at 83. The Nets then responded with their own 9-2 run, forcing the Celtics (18-15) to play catch-up until the final minute, when the C's crawled back to make it a one-possession game.

With 10 seconds left, Marcus Smart stole Brooklyn's inbound pass, setting up a fast break that set up an open look for Jonas Jerebko, whose game-tying 3-point attempt from the corner bounced off the rim. Smart saved the ball from going out-of-bounce, but Jae Crowder couldn't get a shot off before the game clock struck zero.

The Celtics could not find an answer for Lopez. After the C's erased a 10-point deficit in less than four minutes, Lopez scored nine of Brooklyn's 19 fourth-quarter points. The Nets center scored a season-high 30 points on 11-of-24 shooting, grabbed 13 rebounds and finished with a game-hih plus-17 rating.

The Celtics scored 16 third-quarter points on 6-for-22 shooting. In other words, it was ugly. Although the C's cut Brooklyn's lead in the fourth quarter, it was the third quarter's hideous display of shooting against the lowly Nets that stood out the most. The Celtics could've used one of their best shooters in the second half, but Bradley played just 10:31 of the first half before leaving the game with a left hip injury.

The two teams face each other again in Brooklyn on Monday.

When the Celtics were desperate for buckets, they resorted to chucking 3-pointers instead of trying to get to the hoop. It's not the worst strategy, except when you shoot 7-for-32 from distance. Thomas (2-for-9 from 3) and Jerebko (1-for-4 from 3), in particular, just couldn't get the 3's to fall.