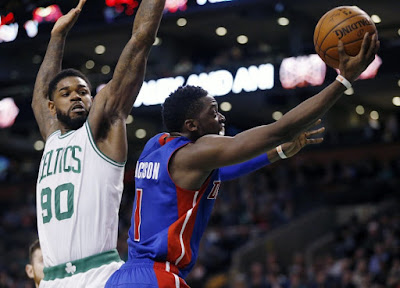 The Pistons outscored the Celtics 33-19 in the fourth quarter, grabbed their first lead of the evening and defeated their hosts at TD Garden, 99-94.

In the final frame, Detroit drained 4-of-6 3-pointers and shot 7-of-8 from the free-throw line, grabbing a six-point lead in the last four minutes. A 7-0 run by Isaiah Thomas briefly regained the lead, but it wasn't enough. In the end, Pistons rookie Stanley Johnson's crucial 3-pointer put the game away for good.

The Celtics had a couple chances to pull out the win, but costly fouls and missed free throws sealed their fate. Isaiah Thomas missed one of three attempts, and Marcus Smart also missed a free throw before committing a loose ball foul on the opposite end, giving the Pistons another pair of freebies and a four-point advantage with 29 seconds left.

After a 1-for-15 start, Thomas made his final five shots and scored 15 of his 22 points in the fourth quarter to go with his 10 assists. After the Pistons opened up a six-point lead in the fourth quarter -- their biggest of the night -- the Celtics' offense needed a lift, and he delivered. Detroit did an excellent job collapsing on Thomas all night until Thomas' big scoring outburst -- 13 points in the final 3:49.

On a night when the Celtics needed his lockdown defense, Marcus Smart struggled to keep up with Pistons duo Jackson and Caldwell-Pope. Offensively, he was atrocious, scoring two points on 1-for-10 shooting. He also made costly mistakes in the final two minutes, fouling Jackson with 1:52 left, missing a crucial layup with 53 seconds remaining and committing his fourth foul on a loose-ball play with 29 seconds left, when a pair of Aron Baynes free throws stretched Detroit's lead to four.


"It seemed like every physical play went their way, especially in the fourth quarter," Brad Stevens said. "They were great on the boards. They were physical on their drives. Their bodies hit our bodies and we fell back. I didn't think it was that hard to really see that one team was clearly out-manning the other at that time. It was a tough time to be out-manned."

The Pistons finished 33-of-74 from the floor (44.6 percent) and made 10 3-pointers on 27 attempts, the first time the C's allowed double-digit 3's since Detroit made 11 against them at The Palace on Dec. 16. The Celtics did little to slow the Pistons in the fourth quarter, when they made 11-of-20 attempts.

The Celtics won't have a lot of time to dwell on their loss to the Pistons, they will travel to Chicago to take on the Bulls Thursday night.

The Celtics' 28 fouls handed the Pistons 36 free throws. They made 23. Those fouls propelled Detroit, especially in the fourth quarter, sparking their offense and keeping them on the C's heels.