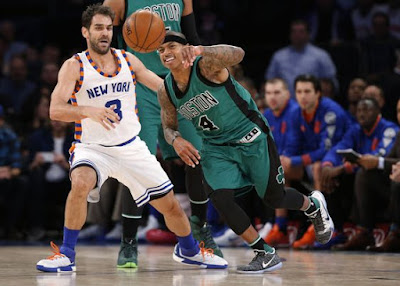 The Knicks defeated the Celtics, 120-114 -- giving the Celtics their fourth consecutive loss and did it with their two best scorers sitting on the bench for most of the second half.

Isaiah Thomas (34 points) scored 30-plus points for the second game in a row, Jae Crowder added 21 points and eight rebounds and Jared Sullinger chipped in 14 points from off the bench. Kristaps Porzingis' 26 points led the Knicks, and Arron Afflalo scored 24 points.

Porzingis and Carmelo Anthony (17 points) combined for 37 first half points and led the Knicks to a 59-49 halftime lead. The Celtics caught a break in the third quarter when Anthony sprained his ankle after running into a referee and Porzingis cooled off -- scoring only six of his 26 points in the second half.

Celtics coach Brad Stevens elected to assign Marcus Smart on Porzinigis to slow him down. Smart nagged the 7-footer for most of the third quarter and slowed down his production but the Celtics couldn't do the same to Afflalo. He scored 20 of his 24 points in the second half and finished the night 9-of-18 from the floor at Madison Square Garden.

Sullinger converted a 3-point play to give the Celtics a three-point lead in the fourth quarter. Following a Knicks timeout, New York responded with a 19-12 run in the final 5:12.

The Knicks finished the night shooting 53.1 percent from the floor. Celtics (19-19) are now tied with the Knicks (20-20) for ninth place in a tight Eastern Conference. The C's will head home Tuesday night to host the Pacers at TD Garden on Wednesday.

While the Knicks were on their way to shooting 53.1 percent from the floor, coach Stevens decided to stick with a 9-man rotation instead of going deep into his bench to counter New York's 14-point lead. Aside from Sullinger's 14 points, the Celtics bench combined for 19 points on 7-for-20 shooting. Stevens may want to consider giving more guys playing time in the near future to help end the Celtics' 4-game losing streak. R.J. Hunter, David Lee, James Young and Tyler Zeller all received DNP's.

Stevens coached the Celtics with a heavy heart on Tuesday. Former Butler standout Andrew Smith lost his two-year battle with non-Hodgkin lymphoma. Stevens got a chance to visit his former player last week and fought back tears while reflecting to reporters about Smith's character and how much the Butler center meant to him. He also tweeted out a special message before the Celtics faced the Knicks.


To the toughest guy I ever met - Thank you, Andrew. We love you and will always be inspired by you.
— Brad Stevens (@BCCoachStevens) January 12, 2016