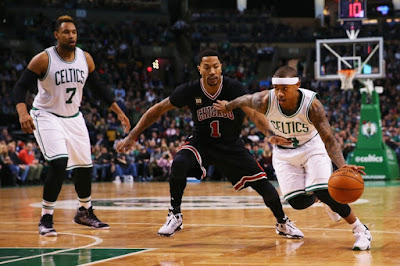 After losing two straight games on the road, the Celtics defeated the Bulls 110-101 on Friday at TD Garden.

The Celtics scored 64 first-half points and grabbed a 16-point lead in the third quarter -- their biggest lead of the night. Jimmy Butler and Derrick Rose combined for 36 second-half points and led the Bulls' comeback. Chicago sliced their deficit down to nine in the final frame and went on a   8-0 run to pull themselves within one point. Celtics responded with a 14-4 run in the final 4:48 and closed out their 23rd win of the season.

The Bulls committed 20 turnovers and never held a single lead.


"We were guarding, that was pretty clear," Celtics coach Brad Stevens said. "Usually when you guard, you're locked and you're engaged, good things can happen offensively."

In one of his better performances of the season, Sullinger was effective on both ends of the floor. With his front court teammate Amir Johnson (family emergency) out of the lineup, Sullinger notched a double-double (18 points, 12 rebounds) dished out five assists and finished the night with three steals.

While Olynyk filled in for Johnson with the starting unit, the Celtics benched scored 30 points. Turner led the bench with 10 points, five rebounds and five assists. Marcus Smart scored eight to go with his five rebounds and Tyler Zeller added seven points in 15:34.

Due to Storm Jonas, Saturday night's game at Philadelphia has been postponed. The Celtics will instead take on the 76ers on Sunday.

The C's grabbed a big lead in the third quarter because of their stifling defense. The Celtics grabbed 14 steals and forced 20 Bulls turnovers. Avery Bradley led with four steals, Jared Sullinger and Jae Crowder each had three. The Bulls' pick-and-roll offense was vital in their comeback that dwindled the Celtics' 16-point lead down to a point. However, the C's adjusted in the final stretch and turned to Isaiah Thomas -- who scored six of his 22 points in the last four minutes.