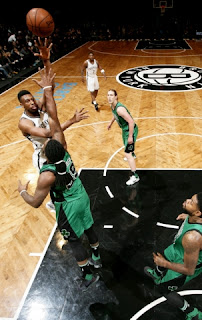 After a two-game home skid, the Celtics added a game to their win column in a 103-94 victory at Brooklyn.


Behind efficient offense, the Celtics scored 54 points in the paint. They shot 44.6 percent from the floor, while limiting themselves to just seven turnovers.

Despite being outscored 52-47 in the second half, the Celtics flirted with a double-digit lead throughout the fourth quarter. The Nets slowly came back in the final frame. Brooklyn made consistent trips to the free-throw line (9-of-11) and converted a handful of layups in the final quarter. Brooklyn made it a five-point game before Jae Crowder's scoring run ended the Nets' hopes of completing their comeback -- He scored eight points in the final 2:42 of the game.

Crowder got it done on both ends of the floor. He scored 25 points on 8-of-13 shooting, including 2-for-4 from distance, and finished with three steals. After the Nets put together a quick 6-1 run towards the end of the fourth quarter, Crowder made a big 3-pointer and then converted an and-1 play that gave the Celtics nine-point advantage with 1:29 left.

The Celtics will look to make it two in a row on Wednesday at home against the Pistons.

Four of five Celtics starters scored in double-digits and all five shot at least 36 percent. Celtics coach Brad Steven shook up the lineup a bit -- he started Kelly Olynyk (nine points on 36% shooting) in place of Jared Sullinger and Evan Turner replaced Avery Bradley (hip). This lineup flourished offensively while Amir Johnson (two blocks, one steal) and Kelly Olynyk (four rebounds, one block) made things hard for Brook Lopez on the defensive end.