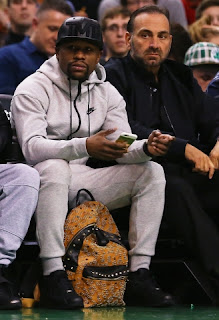 After Isaiah Thomas was named to the 2016 Eastern All-Star team on Thursday, a close friend came to Boston to watch the Celtics take on the Magic at TD Garden.


The undefeated, 49-0, retired boxer and Thomas have been friends for years. Mayweather showed his support on Friday night and spoke to a few reporters before leaving the Garden.


"I'm the first one --- I believed in him a long time ago," Mayweather said. "If you go back and look at it, we've got footage from years ago, me and him hanging out. Very cool." (NESN.com)

Thomas made an apperance on Showtime's Mayweather vs Berto series last summer, where him and Mayweather are shown playing in a full court pick up game. Prior to Thomas' appearance on the Showtime special not a lot of people knew what is now, a very publicized friendship.

Weeks before the all-stars were announced, Mayweather encouraged his followers on Twitter to vote for Thomas to start in this year's All-Star game. His encouragement didn't quite do the trick but instead Thomas was voted in as a reserve by NBA coaches.


"He deserves it," Mayweather told CSNNE's Chris Mannix. "He put in the hard work. Right now, he's one of the best players out there." (CSNNE.com)

Click here to watch the Mayweather interview with Chris Mannix: