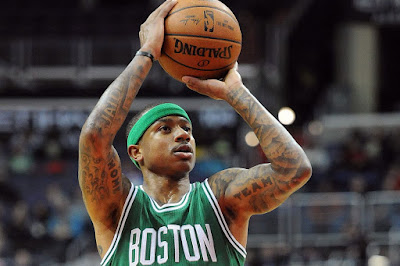 After a 25-point blowout win at Washington against the Wizards, the Celtics (25-21) will look to add to their three-game win streak at home against the Nuggets (17-28). Celtics coach Brad Stevens talked about how well the Celtics have been shooting, what the C's need to continue to do in order to carry their offensive momentum into Wednesday night's game against Denver and if Isaiah Thomas' name should be called Thursday night when the reserves for the NBA All-Star teams are announced.

Celtics have shot over 40 percent from behind the arc in their last two games, Stevens talked about Kelly Olynyk and Jonas Jerebko leading the the Celtics in shooting from distance.

"We've put a large priority on guys that are shooting especially at the forward spots. As far as Kelly playing a lot at the four and five right now, Jonas has played more and there are times you go up and down in a rhythm.

"But I think that regardless of what we're shooting, we have to be good at the other end of the court and when we are we give ourselves a chance to win and if we're shooting well, we have a night like the other night, Stevens added."

Stevens also dded the fact that the Celtics have stepped up on the defensive end of the floor. The defense has led to open shots, and better scoring opportunities. Stevens will look for his team to keep up the intensity.

When asked about Isaiah Thomas' chances of playing in the all-star game in Toronto, Stevens had this to say about his starting point guard.


"I sure hope so. I don't know what the chances are. I know how many coaches vote for it. He sure deserves it. I hope that he makes it from the standpoint of how hard he works, how much time he puts it, how much of an impact he's had on us.