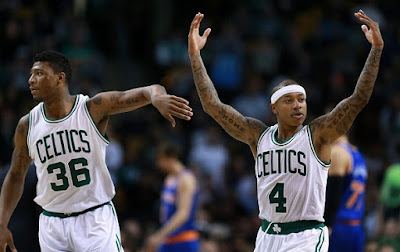 For the first time in his career, Celtics point guard Isaiah Thomas has been selected as an All-Star reserve for the Eastern Conference. The 60th overall pick (last player selected) of the 2011 draft, joins Hall-of-famer Calvin Murphy as the only 5-foot-9 or under player to ever be selected to an NBA All-Star game.

"I've watched [Thomas] since he's come into the game," Murphy said. "I get pissed when people start talking about how good he is because of his size. He's good because he's good." [ESPN Boston]

Thomas, who was originally brought in as a sixth man last year from Phoenix, has put together a great first half of the season for Boston averaging 21.8 points, 6.7 assists, 1.1 steals in 32.4 minutes per game as a starter. He's only one of five players in the NBA averaging better than 21-plus points, 6-plus assists and 1-plus steal per contest. Others on that list include Steph Curry, Russell Westbrook, LeBron James, and James Harden, who are all also heading to Toronto next month.

"It is [important]," Thomas said. "I just worked so hard. I feel like I deserve it. Not just the individual success, but as a team. We've been winning lately, we're fifth in the East, and we're playing at a high level right now. And on top of that, the numbers don't lie. You can stack the numbers up against anybody in the NBA and they'd be there." [ESPN Boston]

Thomas becomes the lowest selected draftee ever to be invited to the All-Star game since the NBA went to two rounds in the draft in 1989, and the ninth player under 6-feet overall.

Boston native, Dana Barros, who's 5'11, was an NBA All-Star back in the 1994-95 season (his first and only selection) with the Philadelphia 76ers. Barros, now a Celtics consultant, remembers what it was like to be recognized as one of the game's best despite his height.

"All-Star is instantly recognizable," said Barros. "A second-grader knows what an All-Star is. Or a 98-year-old who has never watched sports knows what that means. That title of All-Star is validation of what you accomplished and what you worked for." [ESPN Boston]

Barros gets to see first hand the work Isaiah Thomas has put in on a daily basis, and is still amazed by how he's able to find multiple ways of scoring.

"He does it with an array [of scoring moves]," Barros said. "Me, I was able to score so much easier than most scorers. I'd come down and they wouldn't expect me to shoot from 2 feet behind the [3-point] line. He's not doing that. He's taking punishment. It's a testament to how he's doing it, at his size, and to be averaging 21 points per game. It's amazing." [ESPN Boston]

Smart, known for his defensive hustle, will be one of 10 first and second year players selected to the United States roster against a team of international youngsters. Despite missing 18 games this season due to a knee injury, and not being invited to last year's event, the second year guard is happy and shocked at the same time about the invitation.

"Actually, I was surprised," Smart said of being selected. "I thought I missed just as many games this year as I did last year. I didn’t get chosen last year, so I figured the same thing was going to happen this year. But it’s a blessing. It’s something you accept and I thank God for giving me the ability to do it. I’m happy and my teammates have been happy for me. They have been congratulating me and everything." [ESPN Boston]

Here's a look at the both team's roster that will compete in Toronto: