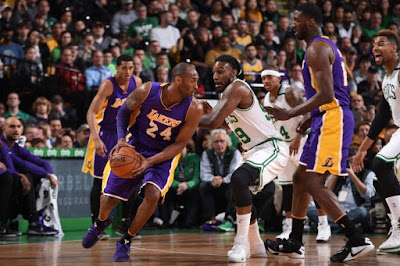 After a poor shooting performance throughout the first half, Kobe Bryant delivered a dagger in the fourth quarter that ended up putting away the Celtics in a 112-104 Lakers win.


In his final game in Boston, fans chanted "Kobe" a few times throughout the night but the loudest one came after Bryant's shot and at the end of the game. Bryant, one of the greatest basketball players to ever play the game, was surrounded by Celtics players on the court as they all congratulated the five-time NBA champion.

Bryant put together a double-double (15 points, 11 rebounds) and was one of five Lakers who scored in double-digits. Jordan Clarkson led Los Angeles with 24 points and Louis Williams (19 points), D'Angelo Russell (16 points) and Julius Randle (15 points) all scored in double figures.

Celtics offense was streaky throughout the first half but found their groove in the fourth quarter while trying to overcome their double-digit deficit. Isaiah Thomas had a team-high 24 points, Evan Turner added 20 points and eight assists and Jae Crowder chipped in 17 points.

The Celtics' struggled to contain the Lakers in transition and gave up 46 points in the paint. The Lakers also started shooting well in the third quarter -- they shot nearly 50 percent heading into the final frame and finished the night 9-for-19 from distance.

Avery Bradley's put-back dunk brought the Celtics to within two points before Clarkson scored back-to-back shots which led to Bryant's big 3-pointer. Kobe's shot from behind the arc pushed the Lakers lead back up to five points with 1:40 left. The Celtics never recovered.

Bryant talked about that big 3-pointer after the game.


"Honestly, I was thinking of using as much legs as possible," Bryant said. "That's what I was thinking about. I couldn't think about anything else. You know, I couldn't really use my shoulder too much, and I was like 'I really gotta get my legs under this shot. Really jump forward on this shot.'

Kobe also talked about what it felt like to hear TD Garden chant "Kobe" in his final game at Boston.


"It was great, man. It was great," Bryant said. "I didn't get the start I wanted but the finish was fine. Being able to say thank you to the fans -- it was a beautiful moment.


"It doesn't surprise me when their players make plays. They have really talented individuals, especially perimeter players," Brad Stevens said. "We had trouble with all of them, and they just didn't feel us. We were off the body, we were going under screens, we were getting back-cut and giving layups, and that happened time after time.

A team like this that has struggled but has that kind of talent, you just can't let them get a rhythm. And then you're playing with fire and that's what happened. That, coupled with I thought Julius Randle just went right through us and just dominated us physically. I thought was pretty evident."

The Celtics will head into the new year with an 18-14 record. The Celtics' next game will be on Saturday when they host the Brooklyn Nets at TD Garden.

The Celtics gave up 17 fast break points -- and most of them came in the second half. The Lakers also did a great job cleaning up the glass, they finished the night with 52 rebounds.