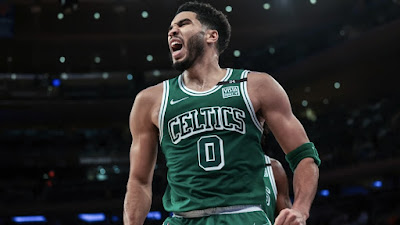 Jayson Tatum has been pretty vocal this summer following the Celtics' loss in the NBA Finals nearly two months ago and amid trade rumors for superstar Kevin Durant.
While it has been reported that Boston has shown interest in Durant, Tatum -- who spoke in an interview with The Athletic -- believes his team can make another deep run.

This current Celtics roster, who have just added veterans Malcolm Brogdon and Danilo Gallinari to the mix, was two wins away from winning an NBA title. Tatum is not only confident that this group can win it all, but also start off strong from the jump.
Despite Tatum already being considered as one of the top players in the league, the three-time All-Star knows there are areas he can improve on in his upcoming seventh year as a pro.

"[I learned] that I'm 24 and one of the best players in the world and that I will compete against whoever and take on that challenge," Tatum said. "In that same breath, I feel like there's so much I could be better at, and I think that’s the exciting part. That I'm at where I'm at, where there's so much more I can be, so much more I can learn and so many more experiences to go through."

Tatum was named All-NBA First Team this past season for the first time in his career after averaging 26.9 points, 8.0 rebounds, and 4.4 assists on 45.3% shooting from the field and 35.3% shooting from three-point territory in 76 total games played.
The Celtics forward made mention that he's working on his body this offseason in order to be ready for another long NBA grind that also includes the playoffs.
At the start of his basketball camp recently, Tatum addressed his shoulder -- an injury he sustained during the Eastern Conference Finals against the Miami Heat -- to which he reiterated to The Athletic that he's been taking care of his body with trainer Nick over the past few months.

"Because I pride myself on playing every game -- that they let me -- that comes from being in the weight room, doing all the things I do with Nick," Tatum stated. "Taking care of my body, changing my diet a little bit, because going to the Finals is another two months added to the season. So, you want to make sure that you're built for that stretch."

With the Celtics preseason schedule already released as of last week and training camp right around the corner, it sounds like Tatum is ready to join his teammates in the best shape of his career.
Joel Pavón
Follow @Joe1_CSP