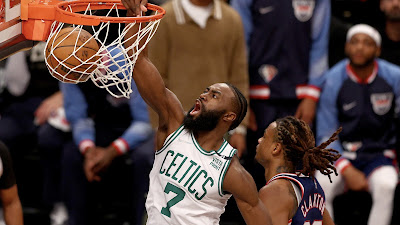 The Celtics roster will move forward as currently constructed for now, as the impasse between Kevin Durant and the Brooklyn Nets has come to an end.
While both KD and the Nets have agreed to continue with their partnership, just how serious were the C's really when it came to reported trade talks for the 34-year-old superstar?
In an interview with WEEI's Merloni, Fauria & Mego, Celtics president of basketball operations Brad Stevens addressed the headlines over the past few weeks of a rumored trade package centered around Jaylen Brown for Durant.

"Listen, at the end of the day I'm not going to go into any conversations that we had because I don't think that's appropriate," Stevens said Tuesday afternoon. "But my job is to know what costs are and then ultimately determine whether or not we want to be involved in any deal with any team around the league.

Stevens insists that if talks did take place with Brooklyn, they weren't as deep as the media made it out to be.

"You say it's been busy and there's been a lot of talk, but it hadn't been for me," he said. "Hopefully it gives everyone something to talk about, but it's been pretty quiet on our front for a while now."

As for Brown, who has been linked to superstars throughout his time in Boston, Stevens noted that the two recently met in Los Angeles and that they have been in touch since the trade rumors began in July.

"Jaylen's been through this from the standpoint of listening and the noise has been around him for a long time, big names over the years," Stevens said. "You've got to be able to ignore the noise and know what's important but also be able to reach out and have candid and transparent communications with the people that are involved. And so yeah, we've had those, made ourselves very open from the get-go as all of this has been going on for any of our guys."

When asked about a possible contract extension for Brown, Stevens added that the team can't talk to the 25-year-old wing until October due to NBA rules, but says the Celtics are hopeful that they can retain him long-term.

"Obviously he is a huge core piece of what we're doing, has been for six years now. We're excited to hopefully put our best foot forward [and] have him here for a long time."

With training camp just few short weeks away and Brown reportedly "all in on Boston" amid these trade reports for most of the summer, it should be an interesting upcoming 2022-23 season to say the least.
Joel Pavón
Follow @Joe1_CSP