Report: Celtics 'not close to a deal' for Kevin Durant after Nets wanted Jayson Tatum and Jaylen Brown 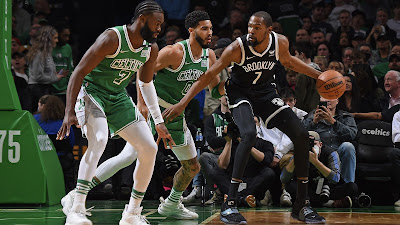 The Celtics and Brooklyn Nets are unlikely to make a blockbuster swap involving superstar Kevin Durant, according to Boston Globe's Adam Himmelsbach.
While Durant reportedly "reiterated his trade request" earlier this week by giving the Nets an ultimatum, per The Athletic's Shams Charania, it appears the two teams couldn't be further away from a deal.
After Boston was rumored to have the best trade package for Durant that included Jaylen Brown as the centerpiece, along with role players and draft picks, Brooklyn seems to be in no rush to pull the trigger on any move just yet.

"According to the source, Brooklyn initially tried to pry both Jayson Tatum and Jaylen Brown from Boston. That proposal went nowhere, of course. The source confirmed recent reports that Brooklyn later shifted its focus to a potential deal centered on Brown, Marcus Smart, and a massive haul of future first-round draft picks. But the Celtics were not interested.
There is usually posturing in trade discussions, and demands tend to soften. But as of this week, when Durant reportedly reiterated his desire to be traded during a meeting with team owner Joe Tsai, the Celtics and Nets were not close to a deal."

Himmelsbach also goes on to report that Celtics president of basketball operations Brad Stevens and head coach Ime Udoka have been in constant contact with Brown with the understanding that this is just the nature of business in basketball.
Meanwhile, another report revealed Wednesday from Sportsnet New York's Ian Begley, insists that the Celtics have now become a desired destination for Durant and he would like to play alongside none other than the reigning Defensive Player of the Year and point-guard Marcus Smart.

With training camp just six weeks away and Durant reportedly demanding Brooklyn to either trade him or fire general manager Sean Marks and coach Steve Nash -- to which Nets owner Joe Tsai showed support for his front office and coaching staff  -- there's no telling if it makes that much more difficult for teams that have shown interest like the Celtics, Miami Heat or Toronto Raptors to even consider meeting the asking price for the 33-year old (soon-to-be 34) superstar who'll be entering season 15.
Joel Pavón
Follow @Joe1_CSP