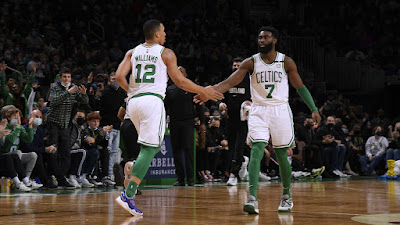 The Celtics have been making headlines so far this offseason for their recent roster additions and of course trade rumors involving Brooklyn Nets superstar Kevin Durant.
Since reports of Boston showing some sort of interest in the former league MVP, to which Jaylen Brown's name has been thrown around as the top trade chip included in any potential deal.
Despite different stories that have been reported, it appears that Brown remains committed to the Celtics, but anything can be considered possible until Durant is actually moved.
While Brown's teammate Jayson Tatum has talked about these trade rumors, you can now add Grant Williams to that list as well, who briefly spoke to the media during the Jr. Celtics youth camp about keeping in contact with Brown over the past few weeks.

"Yeah, it's a significant rumor. It's something that you do your best to take with a grain of salt. I feel like JB is mature in his mindset, and he knows that. And, I've talked to him, texted him, you know, reached out as much as you can. But it's one of those things, it's a league, it's a business," Williams told reporters Friday afternoon. "It's one of those things you can't really be discouraged by. I feel like we love JB. Everyone here in Boston, everyone on the team."

Williams noted that while Durant is one of the greatest players of all-time, Brown's value has been proven by being involved as a centerpiece in such trade rumors, showing how important he is to this current Celtics roster.

Boston traded a young big man prospect in Al Jefferson for Kevin Garnett back in the summer of 2007 and won their 17th championship as a franchise -- their last title since -- the very next year. However, the Celtics were coming off one of their worst seasons ever, while this time around they were just two wins shy of beating the Golden State Warriors in the NBA Finals.
Still, as Brown's name keeps being mentioned in trade rumors, Williams is confident that his teammate for the time being will approach things with a "competitive mindset" going forward -- thus having a positive effect as he continues to work on his game.

So that's good news for the Celtics if they end up not trading for Durant and expect Brown to most likely have the best year of his career.
Joel Pavón
Follow @Joe1_CSP