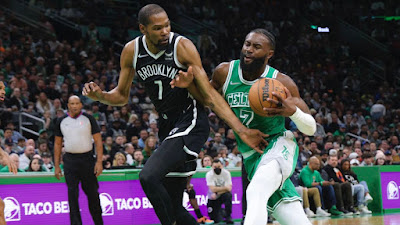 It appears that until Kevin Durant is traded or his relationship with Brooklyn gets repaired somehow, the rumors surrounding a swap for Celtics wing Jaylen Brown won't be going away anytime soon.
It's been over a month since the Nets superstar demanded to be moved and it seems like there is no rush to make that happen, despite a report that Boston offered their other All-Star not named Jayson Tatum a few weeks ago in a trade package that also included Derrick White and a draft pick.
While the Nets supposedly rejected that Celtics trade proposal, Boston Globe's Adam Himmelsbach reported earlier this week that talks between both clubs have stalled and Brooklyn's initial asking price was for both Tatum and Brown to which clearly didn't peek Boston's interest.
Either way, the common denominator and the Celtics best trade chip in any sort of potential deal for Durant begins with Brown.

"Jaylen Brown is the single best player we've heard tied to this thing, so Brooklyn has to keep that alive," one league executive told Steve Bulpett of Heavy.com "I still don't know how real that is, and, trust me, we've been trying to find out for our own sake.

"There may be nothing there at all, or maybe there's something if Brooklyn gets back to reality with what they're asking for. But unless they can find another deal for Durant or they work things out with him, a team like Boston is stuck in this -- the rumors and the whispers around the league at least -- because they've got really good players.

"I'm sure Brad [Stevens, president of basketball operations] has talked to Brown and they're all cool, but that doesn't mean this isn't going to be uncomfortable."

To make matters more interesting, Durant's meeting with Nets owner Joe Tsai this past Monday resulted in the former league MVP giving a reported ultimatum to be traded or the firing of Brooklyn's general manager Sean Marks and head coach Steve Nash, making it even more difficult for reported teams interested -- Celtics, Miami Heat, Toronto Raptors and the Philadelphia 76ers (Durant's newest preferred destination) -- to consider meeting the Nets' high demand.
According to another league executive who spoke to Bulpett, he believes this Durant process with Brooklyn could take as much as months before it gets resolved.

"Unless something comes out of nowhere that we haven't heard or expected, we could be waiting this out," he said. "I think all of us would just like this over one way or another, but that's going to depend on the [Nets'] owner.
"The difference between this situation and almost everything else is that we're talking about Kevin fucking Durant. With just about everything else, you hear what Brooklyn wants and you walk away. But because it's KD, you kind of have to stay at the table and see how things play out -- see if Brooklyn changes what they want or what they'll accept."

As for Brown, who has two years remaining on his current team-friendly deal and is currently eligible for a contract extension, do the Celtics believe they can keep the All-Star wing happy in the long-term?

"I think Jaylen IS long term," this latter source told Bulpett. "If they want him long term and they're going to pay him the contract he deserves, I think he's all-in on Boston. From everything I've been told, Jaylen's a loyal guy. I know frustration can happen when things aren't going well, and I think we saw some of that earlier in this past season.

"But when you take a step back and look at things, I think he wants to be there. And any problems that could ever happen with that relationship would probably have to come from him getting the idea that they're not in on him. And right now I don't see that from the Celtics. I think they know what they have in Jaylen -- now and for the future -- and they want to keep that going.
"But, like I said, it's Kevin fucking Durant, and you know Brooklyn is going to want to talk about Jaylen. Even if stuff about trade talks wasn't getting leaked and reported, anyone with a brain would know that Jaylen's name is going to come up at some point if they're talking to Boston."

With training camp roughly six weeks away anything can happen, as all eyes will be firmly on this Durant saga that doesn't seem has an ending in sight.
Joel Pavón
Follow @Joe1_CSP