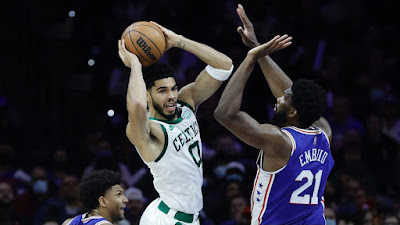 Boston will reportedly be the city that sets the stage for NBA Opening Night this year.
The Celtics are scheduled to host the Philadelphia 76ers at TD Garden as the first game of the 2022-23 season on Oct. 18, according to The Athletic's Shams Charania. While out West, the Golden State Warriors will host the Los Angeles Lakers on the same night they receive their championship rings.

- 76ers at Celtics
- And as previously reported: Lakers at Warriors


The reigning Eastern Conference champs split their season series 2-2 with the Sixers during the 2021-22 campaign and with recent reports regarding Kevin Durant adding Philly as one of his preferred destinations, it should make for an interesting NBA opening night matchup on TNT.
Meanwhile, Charania also reported that the Celtics and Warriors will face off in an NBA Finals rematch first on Dec. 10 in Golden State and Jan. 19 at home.


The Celtics, who reportedly are scheduled to host the Milwaukee Bucks on Christmas Day, face the Heat in Miami -- for the first time since eliminating them in Game 7 the Eastern Conference Finals this past spring -- come Oct. 21 down on South Beach.

- Bucks and Giannis Antetokounmpo open the year on road vs. 76ers, Oct. 20
- Celtics at Heat on Oct. 21 in rematch of the Eastern Conference finals https://t.co/pJU7gGf0Jk


Mark your calendars for now, as the rest of the NBA schedule is set to be released Wednesday afternoon.
Joel Pavón
Follow @Joe1_CSP