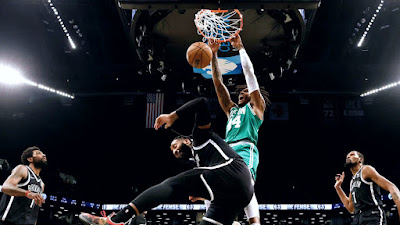 Another rumor is circulating in the Kevin Durant sweepstakes, as the Celtics and now the Philadelphia 76ers have emerged as desired landing spots for the former league MVP.
While a report from Boston Globe's Adam Himmelsbach revealed that Boston and the Nets are "not close to a deal" in a swap for Durant, after the Nets apparently were seeking a trade package that included Jayson Tatum and Jaylen Brown, now it appears that there might be another reason that talks have stalled between both teams.
According to NBC Sports' Kurt Helin, big man Robert Williams is now rumored to be off limits as a possible trade chip.

"There's good reason for pessimism, Durant's ultimatum to Nets owner Joe Tsai did not light a fire under trade talks. If anything, it made it far less likely a deal gets done in the short term. -- why would Boston improve its offer now? It robbed the Nets of leverage. For example, Brooklyn was trying to get Boston to put [Marcus] Smart in the trade, but why would they even consider it now?
That said, even without Smart (or Robert Williams III, sources told NBC Sports he is not available), a Celtics offer with Jaylen Brown may be the best one the Nets will see."

Williams is coming off a breakout 2021-22 campaign, where he averaged 10.0 points, 9.6 rebounds, 2.2 blocks and 2.0 assists in 61 games played -- which were all career-highs. The 24-year-old center, who's going into season one of a four-year, $48 million extension, was also selected to the 2022 All-Defensive Second Team for the first time.
It seems like for the time being Durant is staying put in Brooklyn, especially after reiterating his trade request or the firing of Nets' GM Sean Marks and coach Steve Nash -- to which owner Joe Tsai has shown his full support of his front office and coaching staff.
Meanwhile, with about six weeks to go before training camp let the rumor-mil keep spinning when it comes to Durant possibly landing in Boston, Miami, Toronto and now you can add Philly to the list.
Joel Pavón
Follow @Joe1_CSP