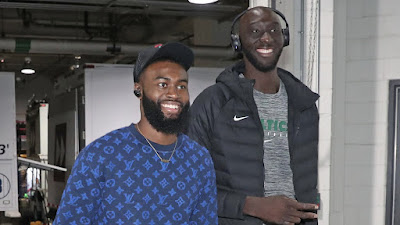 Jaylen Brown can rest easy these days following having his name constantly being thrown around over the past month in trade rumors for Kevin Durant.
Reports that the Celtics offered Brown in a package for Durant to the Nets, made him their best trade chip since Jayson Tatum was rumored to be untouchable and understandably so.
Still, with Durant staying put in Brooklyn and Brown remaining on a roster fresh off a trip to the NBA Finals in the C's, one has to wonder how the 25-year-old will approach the upcoming 2022-23 campaign.
While current teammate Grant Williams believes Brown will have a "chip on his shoulder" with something to prove, former Celtics big man Tacko Fall says the All-Star wing has been "very disrespected" throughout the offseason.
Speaking with Bally Sports' Brandon "Scoop B" Robinson earlier this week, Fall gave some insight on his ex-teammate.

"Man, first of all, I think Jaylen [Brown] is very disrespected," Fall told Robinson Thursday. "He doesn't get the praise he deserves sometimes, and he's a great player, like Jaylen is nice. For him, he's just got to keep doing what he's doing, he's very focused, he's locked it, he knows what he wants to accomplish. The outside noise doesn't really matter, it's what the organization thinks of him, and I know the organization thinks highly of him, and I know he loves Boston, so it doesn't really matter."

Fall, who averaged 2.7 points and 2.6 rebounds in 26 games played for the Celtics between 2019-2021, has signed a one-year deal with the Xinjiang Flying Tigers of the Chinese Basketball Association -- per The Athletic's Shams Charania -- after splitting time between the Cavaliers and their G League affiliate the Cleveland Charge this past season.
As far as if Brown will feel some type of way when training camp starts next month, it remains to be seen despite Celtics president of basketball operations Brad Stevens and head coach Ime Udoka have both said they maintained in contact with Brown during the Durant trade saga.
Brown was Boston's most consistent player in the Finals against the Golden State Warriors, with averages of 23.4 points on 43.1% shooting from the field and 34% from 3-point territory to go along with 7.3 rebounds and 3.7 assists per contest.
The Celtics open up the season on Oct. 17 when they host the Philadelphia 76ers, as they begin their quest to win championship banner 18.
Joel Pavón
Follow @Joe1_CSP