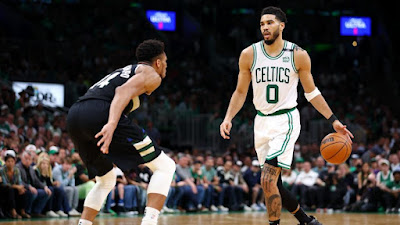 The Celtics will once again face the Milwaukee Bucks on Christmas Day for the second year in the row, according to The Athletic's Shams Charania.
In competing with the NFL on X-mas for the first time since 2017 this upcoming season, the NBA reportedly has five games scheduled per sources. Besides Celtics-Bucks, the other matchups include: Sixers-Knicks, Suns-Nuggets, Lakers-Mavericks and Grizzlies-Warriors.


While Charania didn't not specify the times of the games would be played, the Celtics will be the hosting the Bucks at TD Garden in a rematch of their Eastern Conference semifinals Game 7 win at home. With Khris Middleton back in the lineup, Milwaukee will look to avenge their playoff loss, as both teams are the East's winners of the past two seasons and the battle will also serve as a Christmas Day rematch from last season's 117-113 C's loss on the road.
The reigning champion Warriors will face the Grizzlies, who were their second-round opponents this past spring. Golden State eliminated Ja Morant and Memphis in six games on their way to their fourth title in seven seasons.
It should be an interesting day of sports to say the least come Christmas, especially if you're an NBA or NFL fan.
Joel Pavón
Follow @Joe1_CSP