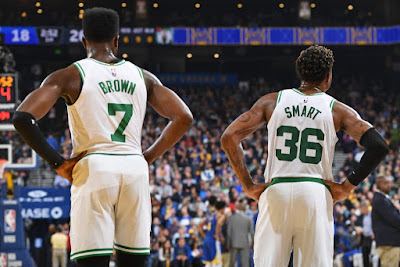 It was less than a year ago when Marcus Smart was inserted into the Celtics starting lineup. The team had gotten off to a rough 10-10 record to start the 2018-19 season, and it didn't take Brad Stevens long to make an adjustment.

Smart started at shooting guard in place of an injured Jaylen Brown on November 26, 2018 against the Pelicans, with Boston winning the game 124-107 and Smart remained a starter for the rest of season.


Marcus Smart is only the 5th player in the past three seasons to play 40 minutes for Brad Stevens in a regular-season, non-overtime game.

And it was a message to the Celtics about the intensity needed to turn things around.https://t.co/UPNOLHIoit
— Chris Forsberg (@ChrisForsberg_) November 27, 2018


Though both the Celtics and Jaylen Brown are off to a much better start almost a year later, Brown has been out of action with an illness, but may return Thursday night against the Charlotte Hornets after missing the last three games. There are two arguments that can be made for him coming off the bench, with the first being that the Celtics have been blessed this season with a bevy of scoring machines.


The Celtics are the only team in the NBA with three players averaging at least 20 PPG.


The team needs one of their scoring-quartet to play on the second unit, and Brown may be the best choice. He just signed an extension, so there is no pressure to play well in a contract year. The second argument is that Marcus Smart is usually assigned to cover the opposition's top player, whatever position or size of the opponent. Whether its any of the backcourt positions, wing or center - it doesn't matter - Smart has proven repeatedly that he can guard virtually any player.

Smart's intensity and ferocious defense is required right out of the gate, which hasn't changed from last season. But the question arises - who would direct the offense on the second unit? Rookie Carsen Edwards is primarily a score-first guard and adequate defender. But he very well could blossom into a two-position player, meaning putting up points and facilitating the offense. If any of this fails, look for more of Brad Wanamaker to possibly take on second-unit direction duties.

Boston currently sits in first place in the Eastern Conference with a 5-1 record. Danny Ainge has his eyes set on a possible title this season, and he will do what is necessary to achieve it. Don't rule out the possibility of a veteran point guard being added to the mix via trade or buyout. The Lakers Rajon Rondo comes to mind. Anthony Davis loves the guy, but LeBron James may prefer to move on without him. Rondo can be opinionated, but he is one of the smartest players in the NBA and a proven vet, particularly in the postseason.

What are your thoughts, should the Celtics stick with Smart as a starter even when Brown returns?