Could Daniel Theis, Robert Williams be the solution at center for Celtics? 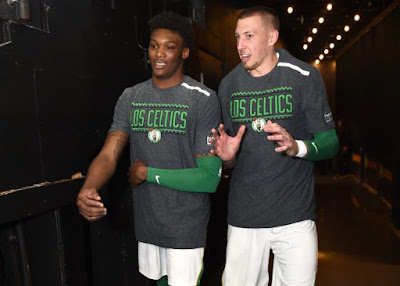 After six games into the 2019-20 season, the Celtics are 5-1 and currently on a five game winning streak, while Daniel Theis and Robert Williams III have held it down for Brad Stevens at center so far.

Theis and Williams splitting time at the five certainly worked well in Boston's 119-113 victory over the Cavaliers on Tuesday night. Theis got the start and played 30 minutes, while Williams added 14 minutes off the bench.

The center duo accounted for a total of 11 points, 13 rebounds - of which Theis grabbed nine - and four assists in 44 minutes of action. They also shot a combined 5-of-11 from the field for a 45 percent clip.

But it was the seven combined blocks by the Celtics center pair that stood out in Cleveland. It's no surprise when it comes to Williams and his specialty to swat away shots, but it's also becoming a mainstay for Theis, as he has a total of nine blocked shots in the last two games.


While neither center can be labeled a stretch-five, but a quick look at Theis' stats from last season shows he hit 26-of-67 from 3-point territory for a very-decent 38.8 percent average. He also shot 54.9 percent overall from the field during the 2018-19 campaign. But in his first two seasons in Boston, Theis never averaged one-block-per game. He is currently averaging 2.6 blocks per-game this season, while playing 22 minutes per contest - both career highs for him, as he is making the most of the uptick.

Williams is averaging 15.2 minutes per game, nearly doubled from his 8.8 minutes last year - and should be in the mid-20's by mid-season if he continues to play the type of defense he's been displaying so far. The Theis-Williams pairing is undersized by NBA standards, and Williams still needs more seasoning prior to playoff time, but the duo just could be a solution for the Celtics at the five-spot.

Theis and Williams have taken full advantage with the absence of Enes Kanter (knee), who should return from injury soon, as both have also earned the right to keep seeing significant minutes even with a fully healthy roster.