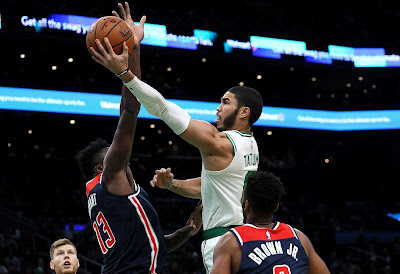 Isaiah Thomas came into TD Garden looking to snap his former team's eight game win streak and hand them their first home loss of the season, instead he only got a deserving standing ovation in defeat, as the Celtics beat the Washington Wizards 140-133 on Wednesday night.

Jayson Tatum followed up an historically awful 1-of-18 shooting display against the Dallas Mavericks two nights ago, with a solid 23-point performance, while Kemba Walker scored a team-high 25 points to go along with 5 rebounds and 5 assists on the night. Jaylen Brown added 22 points, 5 rebounds, as the trio combined for half of the Celtics total scoring output.

Tatum, who was seen at the team's practice facility immediately after his poor shooting night on Monday, bounced back to go 9-of-20 from the field against the Wizards to help the Celtics win their ninth straight.


"Before the game, I'm like, 'Every night's not gonna be the best night. It's all about the bounce back.' And he bounced back tonight," Walker said of Tatum. "I love the way he works on off days to improve his game. We need that kid. We need him a lot, man."

In the team's second game without Gordon Hayward (left hand fracture), who watched from the Celtics bench, seven players scored in double-figures including rookie Carsen Edwards with a career-high 18 points (4-of-5 from 3) and Brad Wanamker chipped in 10 and 5 assists off the bench for Brad Stevens.

Marcus Smart continued his stretch of clutch shooting, going 6-of-12 from the field (4-8 from behind the 3-point arc) to finish with 17 points and 5 assists in his second straight start, while Enes Kanter returned to the starting lineup for the first time since opening night, had a near double-double with 13 points and 9 rebounds, in contributing to the Celtics' highest point total since 1992.

Bradley Beal finished with a game-high 44 points, Rui Hachimura scored 21 and Thomas Bryant added 14 points, 7 rebounds for the Wizards, who are now 2-7 after losing three straight.

Isaiah Thomas finished with 18 points and 7 assists in only his second time back in Boston as an active player. Aside from his ovation during player introductions, the former Celtics All-Star guard also heard some chats of "M-V-P" while at the free throw-line in the the fourth quarter


"It felt good to be out there, but you know I just want to win," Thomas said. "So, we didn't get the job done and that was the most important thing. Overall, it felt good to be back here and to be able to play some meaningful minutes."

Boston only led 68-66 at the break and pushed it to a 102-96 advantage after three quarters, before being up 137-121 with 3:39 left to play in the final frame. Washington went on a 11-3 run to get within five and Walker hit a dagger 3-pointer to hold on to the victory with just over a minute left.

The Celtics were playing without the duo defensive big men of Daniel Theis (finger sprain) and Robert Williams III (ankle sprain), as the team allowed 133 points - 18 more than their previous season-high against any opponents so far. The Wizards took full advantage of their absence, out-scoring the Celtics in the paint 64-50.

Boston will head out on a five-game Western Conference road trip beginning Friday, when they visit the Golden State Warriors in their new San Francisco arena - The Chase Center.

The Celtics and Wizards were pretty evenly matched on the offensive end, both shooting over 51 percent from the field on 96 shot attempts a piece. Boston out-rebounded Washington 56-45 on the glass.