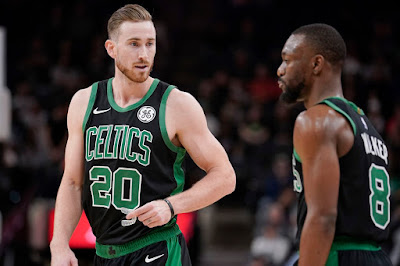 In less than two days following Gordon Hayward's left hand fracture, it appears the Celtics forward has immediately begun the process to recovery.

According to Adrian Wojnarowski, Hayward's agent Mark Barlestein has told ESPN that Hayward will undergo surgery on his fractured left hand Monday in New York.

There is still no timetable set for Hayward's return, though there could be one available after the procedure is complete.


Hayward will undergo surgery in New York this afternoon, a timeline on his return will come after the procedure, Bartelstein of @PrioritySports tells ESPN. https://t.co/sAEud7CXTL
— Adrian Wojnarowski (@wojespn) November 11, 2019


Hayward suffered the injury late in the second quarter of the Celtics' 135-115 win over the Spurs on Saturday night and did not return after an X-ray examination confirmed the fracture.

Keith Smith of Yahoo Sports, reported that Hayward sustained a fracture in his fourth metacarpal, which is the bone in the ring finger closest to the palm of the hand.


Have heard that the early x-rays on Gordon Hayward indicated that he fractured his left fourth metacarpal. That's the bone in in his ring finger that is closest to the palm of the hand. This is often known as a "Boxer's Fracture". This is often treated with a split for 3 weeks.
— Keith Smith (@KeithSmithNBA) November 10, 2019


Celtics coach Brad Stevens spoke to media on Saturday and said surgery could possibly speed up Hayward's recovery and allow him to return to the lineup faster.

Hayward was off to a resurgence after averaging 19 points on 55 percent shooting, 7.1 rebounds and 4.1 assists through the first eight games of the young season, as the Celtics are currently 7-1 and in the midst of a seven-game win streak.

The Celtics announced that Gordon Hayward had successful surgery to repair a fourth metacarpal fracture in his left hand. He's expected to return in approximately six weeks.


#NEBHInjuryReport Gordon Hayward underwent successful surgery today to repair a fourth metacarpal fracture in his left hand. The injury occurred during Saturday night’s game against the San Antonio Spurs.⁰
He is expected to return to play in approximately 6 weeks.
— Boston Celtics (@celtics) November 12, 2019