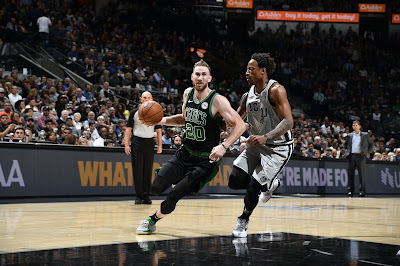 Gordon Hayward was having the best start since signing with the Celtics in the summer prior to the 2017-18 season, only to have another setback, as he suffered a left hand fracture late in the second quarter of Boston's matchup against the San Antonio Spurs on Saturday.


#NEBHInjuryReport Gordon Hayward has been diagnosed with a left hand fracture after an x-ray examination and is out for the remainder of tonight’s game against San Antonio.
— Boston Celtics (@celtics) November 9, 2019


Hayward collided with Spurs forward LaMarcus Aldridge with under a minute remaining in the first half. Hayward retreated to the locker room where an X-ray confirmed the fracture and did not return to the game.


According to the Celtics: Gordon Hayward has been diagnosed with a left hand fracture. Here's the play where it happened: pic.twitter.com/Vwd3FpJsfS
— Celtics on NBC Sports Boston (@NBCSCeltics) November 9, 2019


Prior to Saturday night's game Hayward, who was averaging 20.3 points, 7.9 rebounds and 4.6 assists in the Celtics 6-1 start, is now facing surgery and could miss a significant amount of time.


"I was in shock," Kemba Walker said after the Celtics beat the Spurs. "In those kinds of situations, it's kind of hard to say anything. You just don't even know what to say sometimes. We're going to miss him for the time that he's out."

Celtics coach Brad Stevens seemed optimistic, especially considering what Hayward has gone through since October of 2017 when the forward broke his tibia in the team's season opener.


"This one doesn't feel near as bad as it did two years ago," Stevens said. "So, he'll be back. Be off for a few weeks or a month or whatever it is.

"Going to get with the doctors tomorrow and decide if he needs to do surgery or not, Stevens addd. "Sounds like should he decide that the surgery option (is best, it) might actually be a better timeline. So, we'll see what that all plays out to be."

Hayward was later seen with a soft cast on his left arm and hand in the locker room following the Celtics win over the Spurs.


According to ESPN's Adrian Wojnarowski, Hayward will see a specialist on Monday to determine if surgery is needed.


Boston's Gordon Hayward will see a specialist on Monday to determine need for surgery on fractured left hand, agent Mark Bartelstein of @PrioritySports tells ESPN. If needed, surgery will take place Monday. Timeline on a return is unclear until then.
— Adrian Wojnarowski (@wojespn) November 9, 2019


We will keep you updated on Hayward's injury as more information becomes available.