Celtics get brought back down to Earth following loss, on to Phoenix 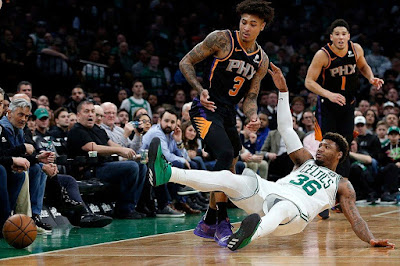 Marcus Smart's last-second floater hung on the rim, seemingly forever and then dropped out, as the Celtics got their 10-game win streak snapped at the hands of the Kings on Sunday.

Marcus Smart spoke about the need for his teammates not to ever get too high when things go well, or too low when they fall apart following the heartbreaker.


"The streak put more emphasis on us to do better," said Smart, who finished with 5 points on 2-of-16 shooting and 9 assists. "Although we didn't want to lose, the loss is a good loss, bring us back down to Earth." [NBC Sports Boston]

The Kings were without point guard, De'Aaron Fox and power forward, Marvin Bagley III, both out with injuries, but it was Buddy Hield who played like an All-Star, pouring in 35 points on 14-of-24 from the field, including seven 3-pointers. This game should not have come down to Smart's end-of-game floater.


The end of the Celtics-Kings game was brutal for Boston...


While Kemba Walker and Jayson Tatum both had off shooting nights, it was  Jaylen Brown who held it down for Boston with 18 points on 44-percent shooting and 4-of-7 from beyond the arc, while taking down eight rebounds. Daniel Theis notched a double-double with 14 points and 10 boards, going 5-of-6 on field goals and 4-of-4 from the charity stripe.


"We started off bad and we've started off bad the past few games and that ball was just sitting on the rim and we didn't deserve it, so it didn't go in," Brown said of Smart's last second shot. [NBC Sports Boston]

The Celtics now have the second-best record in the NBA at 10-2, while the Lakers have a hold on the top spot at 11-2. So it is on to Phoenix to take on the Suns in a second game of a back-to-back Monday night.

Devin Booker is the Suns primary scorer at 25.5 points per-game and point guard Ricky Rubio is their top assist guy with 8.7 per-contest. Old friend Aron Baynes is manning the center spot with Deandre Ayton out with a suspension. The former Celtics big man is averaging 15 points (career-high) and 5.5 rebounds.

Baynes has been a huge surprise this season for the 7-4 Suns, as he has become a 3-point threat in Phoenix, hitting 22-of-47 treys thus far at a 47-percent clip.

Road trips can be tough on the visiting team, but the Celtics may have become a bit complacent - coming in with a 10-game winning streak against a weakened 4-7 King's team. Look for a rebound from complacency tonight.