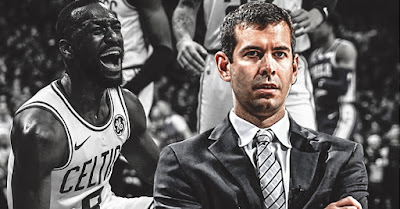 Kemba Walker went through cardio and weight work at the Auerbach Center on Sunday, less than 48 hours following his collision with Semi-Ojeleye against the Denver Nuggets.

The Celtics listed Walker as doubtful for Monday's home game against the Sacramento Kings, considering the All-Star guard's possible neck injury, he traveled back to Boston with the team after a scary scene Friday night.


"He didn't practice so he went through a number of progressions upstairs on the bike and in the weight room. We're just really lucky it didn't end up being near as bad as any of us thought," said coach Brad Stevens. [NBC Sports Boston]

Initially the Celtics announced that Walker had a neck strain and was been evaluated for concussion like symptoms, after he ran into Ojeleye head down and collapsed. Walker seemed disorientated and both team's medical staff members attended to the him before being carted off to the hospital.


"Obviously, they went through a series of things with the Denver doctors and a series of things when he got back [Saturday] with our doctors. And so he is continuing to be monitored in case any of that stuff shows up," said Stevens. "But he's been good and he feels good. It's kind of a minor miracle based on what we saw the other day. But the strain is real and he's got some soreness in his back and neck. That's it." [NBC Sports Boston]

Stevens also added that he noticed Walker grabbed his neck almost immediately when he fell to the floor.


"My No. 1 thing was, is he moving? I actually had a kid at Butler who went in headfirst into the stanchion my last year and very temporarily lost movement," said Stevens. "And that was the scariest thing I had ever been through. So that was my first thought. And then I saw him moving a little bit but he was clearly, like, balled up. So I didn't get a chance to talk to him in that moment.

"When they put him on the stretcher I don't know if he was in shock or what the deal was. But a couple minutes later, 10, 15 minutes later in the ambulance, he looked totally different. But it's scary. It's always scary. The head injuries, the neck injuries are scary. And that's the reason he's doubtful, to be honest. I think he could probably play with the strain part but we want to make sure with the way he hit, and certainly because of the sensitivity to head injuries." [NBC Sports Boston]

G-League point guard Tremont Waters has been recalled from the Maine Red Claws prior to the Celtics' Sunday practice. In case Walker is not able to go, Waters will be active against the Kings.

Walker, who played all 82 games last season and has only missed three games since the 2015-16 campaign, will be further evaluated on Monday before a decision is officially made.