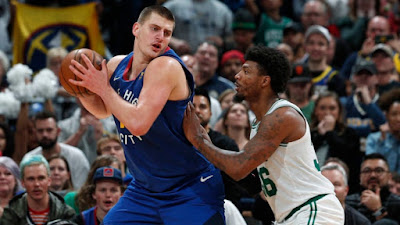 The Celtics looked to end their five-game west coast road trip on a high-note when they entered the Pepsi Center on Friday night, as they rallied back from a 19-point deficit after watching Kemba Walker get carted off on a stretcher.

Boston nearly completed a comeback, but it was Jamal Murray who stopped the bleeding late in the fourth quarter to give the Nuggets a 96-92 win.

Murray tied a game-high with 22 points and hit two clutch free throws to secure the victory with 1.5 seconds left. Meanwhile, Walker was at a local hospital with concussion-like symptoms following a collision with teammate Semi-Ojeleye right before halftime.

Walker was immediately in pain and fell to floor when he struck Ojeleye in the abdomen head-first. Medical personnel from both teams came to Walker's aid, as he remained almost motion-less for several minutes.


"That's not something you want to mess around with, Murray said. "Prayers out to him and hopefully he's fine." [ESPN]

A brace was placed around Walker's neck, as he was placed onto a gurney and finally wheeled off the court in front of stunned crowd.


"I saw him in the ambulance at halftime, Celtics coach Brad Stevens said. "He had his wherewithal about him. He was in decent spirits, which is good." [ESPN]

The Celtics are now down two starters after Gordon Hayward also fractured his hand earlier this month when the forward collided with LaMarcus Aldridge against the Spurs.

Nikola Jokic notched another triple-double of 18 points, 16 rebounds and 10 assists, while Paul Millsap contributed with a double-double of 14 points and 10 rebounds for the Nuggets, who are now 11-3 on the season.

Jaylen Brown finished with a team-high 22 points and 10 rebounds for the Celtics, who dropped their second loss in a row. Jayson Tatum scored 16 points and Marcus Smart added 15.

Brown hit a corner 3-pointer with 2:18 left to get the Celtics within one, 84-83, before Murry made two free throws and a jumper to push the Nuggets lead 88-83. Boston made it a one possession game and Millsap got off another 3-pointer, as the Celtics never got any closer than within two the rest of the way.

Denver led by as many as 17 in the first half and the Celtics were in the middle of a 11-0 run before Walker suffered his injury.


"It's tough," Smart said of resuming play after watching Walker's scary moment unfold, "but we tried to gather it up for him and go out there and give it everything we had for him." [Celtics.com]


"I told the new guys who are showing signs of this – I told them the guys that are holdovers here (from last season), those dudes are warriors," proclaimed Stevens. "To come back in that game, on the last day of a trip, after seeing Kemba go down, in Denver, against that team? To give us a chance to win? They're warriors." [Celtics.com]

Though there's no timetable as of Saturday morning on Walker, players like Brad Wanamaker, who scored 14 points and 4 assists off the bench, have already stepped up.


"We had [five] games in [eight] days on the road on the West Coast," Smart said. "Everybody's banged up. Everybody's bruised. We got down, we could've quit, but it just shows this team – we kept fighting, and everybody came in and contributed and helped. We just came up short." [Celtics.com]

The Celtics return home after going 2-3 on their road trip to host the Kings. They'll look to avenge a loss to Sacramento from last week on Monday night at TD Garden.

Denver out-rebounded the Celtics 57-46, which included 11 offensive boards for the Nuggets. Boston forced 18 turnovers and turned them into 24 points.