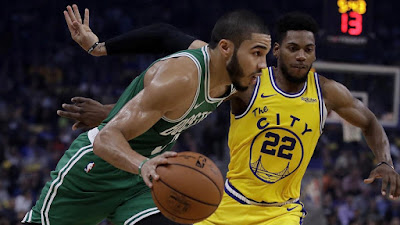 In the last five-plus years, whenever Boston faced the Warriors on the road it was must-see TV. Friday night at the new Chase Center was no different, despite Golden State being undermanned, the Celtics had to work for their tenth straight victory beating the 2018 champs, 105-100.

Jayson Tatum's dunk with 1:36 left after an out-of-bounds call in Golden State's favor was overturned, which led to a jump ball in a crucial moment of the night and landed in the Celtics forward's hands, as he led all scorers with 24 points and 8 rebounds.

Jaylen Brown finished with 22 points on 9-of-17 shooting and also grabbed 8 rebounds, while Kemba Walker, who got off to a slow start, scored 20 points to go along with 5 rebounds and 5 assists.


"We knew that we were going to get their best shot," Brown said after the game. "They came out high intensity, they jumped on us early. As we're a young team, we're getting used to being the team that's being (chased) and handling that better."

Marcus Smart hit all 15 of his points on five made 3-pointers, shooting 5-of-9 from beyond the arc and also dished out 4 assists for the Celtics, that are now 10-1 on the young season.

For the injury-plagued Warriors, who were already without Stephen Curry (hand) and Klay Thompson (ACL), they have now played two of the top NBA teams in consecutive games when it comes to the Celtics and Los Angeles Lakers, resulting in a loss.

D'Angelo Russell had 12 points, 7 assists (including nine turnovers), before exiting the game with a sore thumb, as the Warriors are now 2-11 and have the NBA's worst record.

With Golden State up one, Walker hit a 3 to put the Celtics ahead 97-95 with 2:19 left to play. The Warriors had the ball with 54.3 seconds remaining and Burk missed a potential game-tying 3-pointer, while Walker scored on the other end following Tatum's jump-ball dunk to ice the win.

Though Boston led by as many as 15, neither team shot particularly well, but the C's 13 steals and 20 overall forced Golden State turnovers led to 22 points.

The Celtics will look to extend their win streak when they head to Sacramento to face the Kings (4-7) on Sunday afternoon.

Gordon Hayward missed his third straight game with a left hand fracture and his second since the procedure was done.