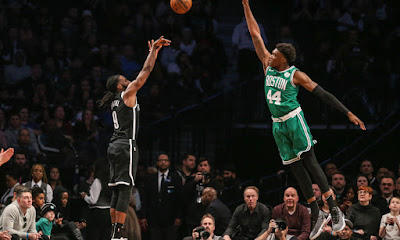 Celtics second-year center Robert Williams III, has already established himself as an elite shot blocker. At 6-foot-8, with a 7-foot-6 wingspan and seemingly unlimited athleticism, his primary value on the court is to be a rim protector.

Though the comparison of Williams with someone like the legendary Celtics icon Bill Russell, which by the way is strictly about shot blocking and nothing else, might be premature but not far off.

Russell at 6-foot-10, came into the NBA in December of 1956, approaching the age of 23. The Hall-of-Fame'r could never hit a shot from any distance and his foul shooting would never win him any honors - but he could do everything else. He was an extraordinary re-bounder, but it was his ability to blocks shots that stood out. 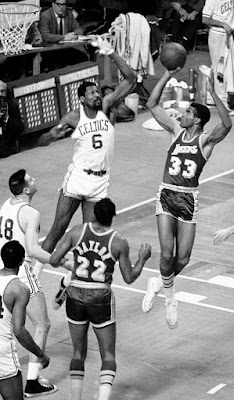 Blocks were never recorded as a statistic during Russell's tenure in Boston, but it is estimated that he averaged roughly eight blocks per-game for his 13-year career. It should be remembered, however, that Russell was a sizable center at the time, and with that length, a 7-foot-4 wingspan and leaping ability, he could deflect shot attempts and deter opponents from attempting them. He was the main reason that blocked shots became a recorded stat.

Williams came into the NBA last season at the age of 20. For his short career, he is averaging just under five blocks per game over a 36-minute span. He only averaged 8.8 minutes last season, and only saw action in 32 games. Russell, on the other hand, saw minutes in the thirties his first two years, and those minutes got into the forties for most of his remaining years.

In 22-minutes off the bench against the Spurs on Saturday night, Williams finished with a career-high 11 points and 6 blocks, as the Celtics won their seventh straight game.

Rob Williams had a career-high 6 blocks tonight. That's also tied for the most blocks in a game this season by an NBA player.
— Taylor Snow (@taylorcsnow) November 10, 2019


While Russell was a taller-than-average center at the time, Williams is undersized at the position. It doesn't seem to matter, with Williams' elevation, position and timing, and you can immediately see Russell-like shot-blocking potential in him. More time on the floor will make Williams better, as he'll almost certainly never achieve Russell's overall talent level, fame or astounding rebounding ability. But don't be surprised if, with more seasoning, Williams electrifies Celtics fans with his talent to deter shots, which he is already doing.