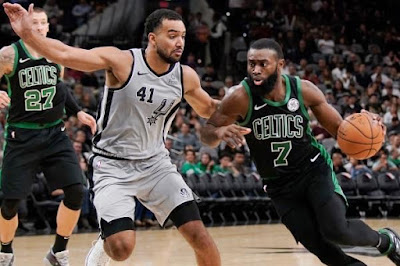 It was bittersweet for the Celtics who beat the San Antonio Spurs 135-115 on Saturday night, in the team's most dominating win of the young season for their seventh straight victory.

Jaylen Brown led all scorers with 30 points on 10-of-18 shooting to go along with 7 rebounds, while Kemba Walker added 26 points, 8 assists and 5 rebounds in rout of Brad Stevens' first win ever at the AT&T Center and the Celtics' first overall since 2011.

Boston is now 7-1, despite the loss of Gordon Hayward, who suffered a left hand fracture late in the second quarter and did not return after a collision with Spurs forward LaMarcus Aldridge. It's the second significant injury of Hayward's Celtic career since 2017 when he dislocated his ankle six minutes into the team's season opener.


"It's tough," Jaylen Brown said of Hayward's injury. "I don't know what the timetable is, but that's tough to deal with an injury, especially (because) Gordon's playing really well right now and we're leaning on him to help us with this season and this run that we're trying to make."

No timetable has been set yet for Hayward, who finished with 9 points and 2 rebounds in 15 minutes of action before exiting to the locker room for an X-ray examination, which confirmed the fracture.

The Celtics plan to rely on the depth of their roster to keep things rolling while Hayward's out of the lineup.


"We're definitely going to miss him," said Kemba Walker, "but you know, we just need guys to step up. Now it's our opportunity for other guys until he comes back and we just have to hold the fort down."

The Celtics immediately did just that, leading the Spurs 72-54 to start the second half and they didn't miss a beat in Hayward's absence - as Marcus Smart caught fire to finish with 16 points off the bench, while hitting 4-of-9 from behind the 3-point arc.

Robert Williams III had a career-high 11 points, going a perfect 5-for-5 from the field, 7 rebounds and 6 blocked shots. The Celtics second unit scored a combined 43 points and grabbed 13 rebounds in what probably could be a sneak peek of good things to come going forward for coach Stevens.


"I think we've got a lot of good guys in this locker room, guys that have got the right mentality," Brown said. "They put in the work, so I think we'll be fine."

The Spurs (5-4) never got into any kind of rhythm offensively, shooting 39.4 percent from the field. DeMar DeRozan led the way with 22 points, while Patty Mills contributed with 20 off the bench and Bryn Forbes chipped in 14 points for the team's third loss in their last five games.

Boston will look to extend their win streak to eight and await any updates regarding Hayward on Monday when they return home to host the Dallas Mavericks at TD Garden.

The Celtics outscored the Spurs 60-30 in the paint and forced 15 San Antonio turnovers on 11 steals - which resulted in 19 points for Boston.