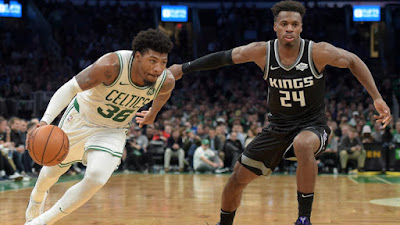 Marcus Smart got some redemption against the Sacramento Kings on Monday night at TD Garden, as just another example of how far the guard has come in the last two years.


"It was a good feeling," Smart said after the Celtics 103-102 win. "When I shot it and I saw it on the rim again, I said 'I got to get it this time.' It felt good to finally see the ball go in. It's just ironic that it happened to bounce like that. I got it this time."

Smart has always been out to prove his naysayers wrong, but it was back in February of 2018 when his basketball career nearly came to an end. The longest tenured Celtic spoke about keeping the shards of glass that were pulled from his right hand after punching a picture frame, following a loss to the Lakers and required 20 stitches.

In a recent podcast interview with ESPN's Zach Lowe, Smart explained why he kept the glass that doctors say ended up between two tendons near his right pinky that could have cause serious damage to his hand.


"I actually still have the glass somewhere saved … to remind me each and every day how blessed I am to still be playing," Smart told Lowe.

While it's no secret that Smart has endured all types of aliments during his six seasons in Boston, it was that hand injury that proved to be the one that hit home the most.


"The doctor actually told me, like you said, an eighth of an inch away I probably might not be playing basketball again for the rest of my life," Smart added. "They said it would have tore everything in my hand. It was pretty thick amount of glass that came out of my hand. I couldn't believe it...I actually still have pieces of glass stuck in my hand."

According to Smart's doctors, the decision to leave certain pieces of glass was not as dangerous than actually attempting to remove it. The injury essentially only required stitches and he missed 11 games after it was determined that surgery was not needed, which would have ended his season.


"I'm embarrassed and disappointed in my actions," Smart tweeted at the time. "I swiped at and hit a picture frame on the wall. I feel like I let all y'all down."

Another testament to what Smart has gone through over the last 18 months or so would of course be the passing of his mother just prior to the start of the disappointing 2018-19 season.

Smart's mother lost her battle with cancer and the Celtics guard detailed how last year's roster had trouble communicating with each other when it came to teammates dealing with off-court issues.


"I think it was just hard for everybody last year, including myself," Smart told Lowe. "I was dealing with my mom's passing, and everybody had their own little individual things they were dealing with.

"(So) when it came to the team, it was like, 'Eh, oh well. I've got more things I'm stressed about that I need to be focused on right now individually.' And the team kind of got put on the back shelf."

While the passing of Smart's mother weighed heavy on the guard's mind throughout an up and down season, he did suggest that might have played a part of the Celtics lack of communication when it came to talking about personal struggles.


"You were afraid to talk. You didn't know how to talk to anybody," Smart said. "Growing up as young men, you're always taught that you don't want to show your emotions, you don't want to cry, and there's this stigma on it that as a man, you're supposed to be manly.

" ... Mental health is a big issue in a lot of sports, and that's what was going on. Instead of putting ourselves out there, everyone was holding it in."

After many changes this season, those who still remain from the 2018-19 campaign know what it's like to not be able to trust their teammates on and off the parquet. Smart already has noticed the difference in the environment of the locker room that seems much more positive.


"Now, everybody's mind is free. Everybody's confident, everybody believes more in themselves, and we're just having fun again," Smart said. "Whatever anybody individually was working on, instead of holding it in, we're now even talking to each other about it. We couldn't do that last year.

"I think last year just opened our eyes to the outcome of holding all that pent-up aggression or whatever you're going through inside. That doesn't work for us." Smart added. It's going to bring you down, and everyone hated feeling down."