Buyer's Remorse: Should Danny Ainge have drafted Buddy Hield instead of Jaylen Brown? 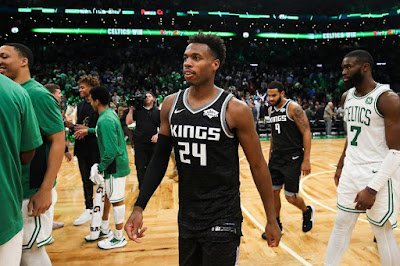 Entering the 2016 NBA Draft, Buddy Hield and Jaylen Brown were both projected to be top-5 picks and were also two viable options for the Celtics.

Ben Simmons and Brandon Ingram were a cut above the rest, they were locked in as the top two picks and everyone else was up for grabs for the Celtics. With the No. 3 pick, Hield, and Brown both offered tremendous upside for Boston.

Hield was labeled the draft's elite sharpshooter following his junior year at Oklahoma while Brown was credited for his athleticism as a slasher on offense with the potential to be a top-notch defender on the opposite end. The Celtics held workouts for both.

And if one were to say Hield impressed the Celtics brass in Waltham, that person would be putting it mildly. They were blown away by the Oklahoma product’s outside touch — one that saw Hield make 85 threes out of 100 attempts. He set a new Celtics pre-draft record.

Brown, on the other hand, was the more intriguing option and was projected to be the kind of player that could help the Celtics in multiple areas. Jaylen was considered to be the best two-way prospect of his class and as a 1-and-done college player, his ceiling was essentially higher than Hield's.

In retrospect, Danny Ainge missed out on selecting one of the league's best 3-point shooters. You could make a strong case that this year's Celtics team would be better off with Hield in its starting lineup instead of Brown, considering how dominant he's been 16 games into the 2019-20 campaign.

There's a reason why the Kings didn't risk losing their best scorer to free agency in 2020, inking him to a 4-year extension that will see him make at least $94 million. Only three players in the league are currently averaging more 3-pointers per game than Hield (3.9).

Scoring 20.4 points a night at a 42.5 percent clip, Hield is on pace to have a career year this season and Monday at TD Garden, was an epic night. He scored a career-high 41 points, including a career-best 11 3-pointers and finished 15-of-26 from the floor in a loss to the Celtics.

He was the reason the Kings nearly won its season series against the Celtics -- he's easily been the best player in each of their two games -- Hield scored a combined 76 points while shooting 58 percent, including 18-of-33 from behind the arc. He was unstoppable against the Celtics Monday night, needing just over a second to get his shot off, it seemed like Boston was always one step behind in closing him out on the perimeter.

Three years removed from the '16 draft, it's difficult not to imagine what could have been, especially when you factor in Jayson Tatum, who the Celtics drafted the following year. Hield, as an outside threat, is an ideal fit alongside Tatum, who would have extra space to work with due to Hield's presence behind the arc alone.

Opposing teams would be forced to close out on Hield, thus making things easier for Tatum to attack. However, Brad Stevens isn't the kind of guy who will solely judge a player for what they do on the basketball court. He's more interested in what kind of person the player is off the court, basketball-IQ, analytics and how well it will translate at the professional level -- these factors matter the most to Stevens.

Brown simply checked all of the appropriate boxes. Stevens raved about Brown's high-IQ, one league executive even went as far as to say Brown was "too smart for the NBA" and the biggest knock about his game was his shooting.

Brown was everything Hield wasn't -- which is what made him a better fit for a Stevens-led Celtics team. Ushering in a new era, Ainge and Stevens rebuilt a culture that commenced with team-oriented underdogs led by guys like Evan Turner, Jae Crowder and Isaiah Thomas who were loaded with untapped potential.

Brown fits the mold. He wasn't a guy who needed to take 20 shots to be significantly effective, a high volume shooter like Hield probably would have had a tough time adjusting on a team where he wasn't the focal point of the offense.

Instead, Brown's provided plenty of upside as a strong finisher who can score in a multitude of ways. He's averaging 19 points while shooting 47.4 percent from the floor and drains a pair of 3-pointers a night at a 36.5 percent clip from behind the arc. Also, despite what we saw Monday night against Hield, Brown also continues to improve as a wing defender.

While it's fun to envision Hield donned in green-and-white, going for 30-plus point performances while draining treys at TD Garden on a regular basis, we're still fascinated to see Brown fully blossom before our eyes, and quite frankly so are the Celtics. Rajon Rondo used to be the only rookie contract we had seen extended in recent history by Boston until Ainge committed to Brown last month at the price of $115 million for four years.

It was a smart move that contractually locks in Brown with Kemba Walker, Jayson Tatum and Gordon Hayward, if he opts in to his player option, through at least 2021. Since 2016, Brown has continued to improve year after year and at this rate, Stevens and Ainge most likely look back at his draft with no regrets over passing up on Hield.