Brad Stevens: 'I don't really care about the record or how many games we've won in a row' 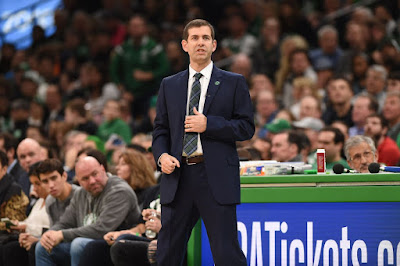 The Celtics are currently on a 10-game win streak, while also owning the NBA's best record at 10-1.

But if you ask coach Brad Stevens, he's not thinking about win streaks or where his roster is at in the standings, even after the Celtics 105-100 win over the Warriors to kick-off their five-game west coast road trip.

"I don't really care about the record or how many games we've won in a row," said Stevens afterwards. "This is a hard stretch coming up and we just have to keep getting better. You can see, we still have a lot of things that we have to clean up especially when were not (healthy). That's part of it." [CelticsBlog]

Kemba Walker, came up big in the fourth quarter when it mattered most against Golden State, hitting clutch shots to put the Celtics ahead for good.


"I've never won this many games in a row," said Walker after the team's latest victory on Friday. "I've never had a start like this. I'm just loving the way I'm feeling after games." [Celtics.com]

It's no surprise that the Celtics offense is clicking together so well, even after missing Gordon Hayward for the last couple of games. But it's the interior defense that could remain a concern for Stevens, especially with Enes Kanter, Daniel Thies and Robert Williams being in and out of the lineup with injuries to start the season.

Boston, who were without both Theis and Williams in Wednesday night's win over the Wizards, allowed 64-points in the paint, while against the Warriors the Celtics cut that number down to 44 with Theis back in the rotation. Still, Stevens knows that it's going to take more than just his bigs to get stops around the hoop.


"I didn't think we were good defensively at the rim, but they put a lot of pressure on us down there," said Stevens in regards to the Warriors. "Some of our guys have got to take more charges and we got to be better and more vertical than we are. That was a strength of our team through the first five or six games and we didn't do a good job of that today. That's not one big. That's one through 13 on our roster." [CelticsBlog]

The Celtics, who are ranked ninth overall in defensive efficiency, have allowed an average of 113.5 points in their last four games. Look for Boston to tighten that up, as they continue their road trip on back-to-back days beginning in Sacramento on Sunday afternoon and Phoenix Monday.