Isaiah Thomas on his future: 'I'm going to be an All-Star again' 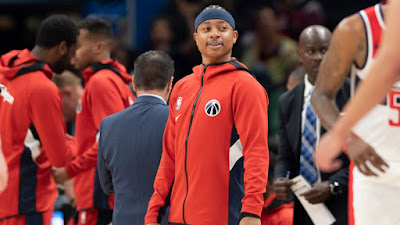 Isaiah Thomas is back in Boston, as a member of the Washington Wizards to face his former team the Celtics.

Thomas, who signed a one-year, veteran minimum deal this past offseason is now a starter for the Wizards and ready to make the comeback he knows he's capable of.

Though prior to his arrival in D.C. and following stints in Cleveland, Los Angeles and Denver over the past two and half seasons, not to mentioned hip surgery in 2018, Thomas had only appeared in 44 games since being dealt by the Celtics for Kyrie Irving just over two years ago.

Now the second option for the 2-6 Wizards behind new teammate and current All-Star Bradley Beal, Thomas made one simple declaration when asked what the future holds for the 30-year-old.

You can count Brad Stevens as one of Thomas' biggest fans and supporters, despite all that the "Little Guy" - as Celtics legend Tommy Heinsohn always calls him, has gone through since he last called Boston home.


"I'd never bet against Isaiah," said coach Stevens in a recent phone interview. "When we added Isaiah, it just really went to a different level for the years he was there. He was infectious. His work ethic was contagious. He was a competitor." [Boston Globe]

Who could forget the the MVP caliber season that was the 2016-17 campaign for Thomas, where he averaged 28.9 points and took an underdog Celtics roster to the Eastern Conference Finals?

But it was the trade demand of a then Cavalier point guard that would change the course of Thomas' NBA life, when Danny Ainge couldn't pass up the opportunity to swap his All-NBA point guard for Irving just months after that magical postseason run.


"Nobody really thought that would ever have happened," Stevens said, explaining the unusual circumstances of Irving's trade request from the Cleveland Cavaliers that set the blockbuster deal into motion. "So yeah, that was really hard." [Boston Globe]

In just his second visit to Boston as an active player, after last season's long-awaited video tribute, Thomas holds no ill-will towards the franchise that believed in him the most.


"Everybody else talks about Boston, I don't. That's in the past. I'm in the present right now, looking forward to the future," Thomas said. "I think at the time I was upset because it came out of nowhere. I got hurt playing for them, so that was tough and then for them to do that. I understand it's a business but I don't feel like you're supposed to go about it that way.

Though Thomas enjoyed his time in Boston, he knows it will take time to get back to that All-Star level he once was a member of the Celtics. However, his new Wizard teammates have embraced him, as he continues the journey to re-gain somewhat of his old form.

Celtics tip-off against Isaiah Thomas and the Wizards Wednesday night at TD Garden.