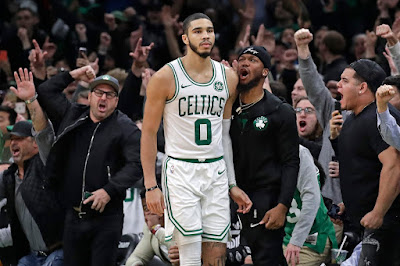 For Jayson Tatum, Friday at TD Garden is a night he will never forget.

After his former teammate, Marcus Morris, drained a game-tying 3-pointer with 4.7 seconds left, Tatum found the bottom of the net off a fade-away jump shot to cement his first career game-winning shot that sealed a 104-102 Celtics win over the Knicks. It was a fitting ending for the two.

Morris, who drew a foul on Tatum and eventually pulled the game to within one point off of his made free-throws, spoke about mentoring the third-year forward at Friday morning's shoot around throughout his two seasons in Boston. As one of the few veterans on last year's team, Morris talked about taking Tatum under his wing and how happy he is for Tatum's recent success.


Still, Morris was looking forward to going toe-to-toe with Tatum, and was excited about the possibility of taking him and the Celtics down in his first game in Boston since signing with the Knicks.


"We've been talking about this moment for a while," Morris said after Friday's game. "I told him 'When I come back here, if I do, we're gonna go at it.' He's going to be a great player in this league for a while. I'm happy to be a part of his career so far."

Going back-and-forth against Morris made Friday night all the more special for Tatum.


"That was great. Everybody knows we got a great relationship," Tatum said. "He's like a big brother to me. I kind of wish that I would hit that shot over him but we won so I'm happy."

Tatum finished the night with 24 points, including eight in the final frame to go with his 6 rebounds and three assists. As far as taking the next step in his career, Tatum's big night certainly proves he's trending in the right direction.

His desire to take on a much more prominent role with the Celtics means we should be seeing more nights like these in his near-future while continuing to lead his team, one that is now on a four-game winning streak, in the upper echelon of the Eastern Conference.


"It feels great," Tatum said. "I don't want to get too excited. The guys that I look up to in this league, they do things like this all the time. I got somebody on my team, Kemba (Walker), he's done this plenty of times. Kyrie did it.

"It feels good to hit one. Hopefully, I have more in my career but I gotta keep working. I have a long way to go."

Morris led with a team-high 29 points. He also finished with 9 rebounds, three assists and three steals. And the Knicks third overall pick RJ Barrett, who Tatum drained the final shot over, poured in 15 points, alongside grabbing 7 rebounds and earning 5 assists.


Meanwhile, Kemba Walker finished what he started in New York last Saturday, giving the Knicks another 30-plus point night -- it's the third straight game in which Walker scored at least 32 or more points for the Celtics.

He finished with 33 Friday night and pulled down 6 rebounds to go with his 5 assists. Walker and Tatum combined for 57 points while shooting at a 47.2 percent clip.

Is Tatum the guy you thought you'd be joining when you decided to sign with Boston?


"No question," Walker responded. "That kid is so talented. I'm happy for him, I'm happy he made that shot. That was a huge, big time shot. I'm happy we went to him, hopefully that keeps him confident. That can really get something going for us. That was an unbelievable play."

The Celtics will be hitting the road next week, making three stops, including Charlotte and San Antonio after kicking things off against the Cavaliers in Cleveland Tuesday night.

For the third straight game, Kemba Walker reached at least 30 points, six rebounds and four assists. He is the first Celtics player to do so since Paul Pierce did it in 2002 (Nov. 22-27).