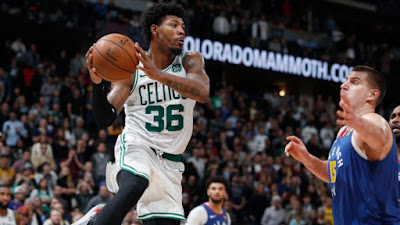 Marcus Smart is upset, but not only with the Celtics 96-92 loss to the the Nuggets on Friday night, but also with a courtside fan that he exchanged words with in the fourth quarter.

While chasing a loose ball, Smart fell into the front row crowd at the Pepsi Center. When he got up, he heard some derogatory comments from a nearby fan.


"My foot got stuck in a chair, and the fan told me, 'That's right, stay on the ground, get on your knees,'" Smart said afterwards. "Excuse me? You know what I'm saying. I just told him, 'Listen, just watch the game.'"[ESPN]

As of Saturday, NBA spokesman Tim Frank says the league is investigating the incident, as Smart also said that he wasn't happy with security's response after he pointed out the fan.


"I told them who it was. They just looked at him and didn't even say anything to him," Smart said. "... Probably if I was a superstar, they probably would've did something for it. It is what it is.

"We're gonna end up protecting ourselves eventually, and it's not gonna be pretty for those fans. We don't want that, the league doesn't want that, we don't want that as players, but at some point you have to stand up and you gotta protect yourself as a man." [ESPN]


Video showed stadium officials speaking to fans in the area where Smart fell into but no action was taken and the Nuggets told the Denver Post that security looked into the situation but could not determine what had occurred.

Smart, who was suspended for three games in college at Oklahoma State (February, 2014) for shoving a Texas Tech fan that reportedly used a racial slur at him, plans to move on from Friday's incident but believes player and fan altercations have become an ongoing issue.


"That's a problem in the league that we gotta fix, because if we retaliate to protect ourselves, we're the ones getting in trouble -- they're not -- and that's not right," he said. [ESPN]