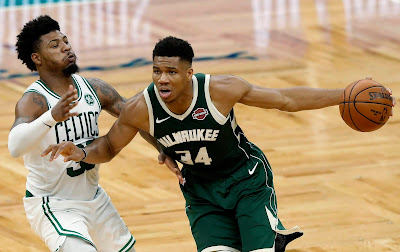 When Danny Ainge signed Marcus Smart last summer to a four-year, $52 million contract, it was criticized by a few as a mistake - meaning too much money, and too many years for a player with limited offensive skills. That thinking may be changing right now.

In the Celtics win against the Milwaukee Bucks on Wednesday night, Smart displayed on both ends of the floor why he is so much more valuable than his current contract may suggest. He finished with 19 points - on 7-of-16 shooting, including 5-of-11 from behind the arc - and 6 assists, while making life frustrating for the reigning NBA MVP Giannis Antetokounmpo on the opposite end.


Smart, who is arguably the league's best defensive guard, seems to get everybody's respect when it comes to his ferocious defense and never taking a play off. Well, after four games this season, that defense appears to have improved even more so, and his offense has come around remarkably.


Both Kemba Walker and Gordon Hayward are set to make $32.7 million each this season, compared to Smart's $12 million. In the Celtics' comeback victory over the Bucks, Smart was all but indispensable for his determined defense on Antetokounmpo and his offensive output. Smart's steal, drive and slam in the third quarter was the turning point for the Celtics, who were down by 13 points at that juncture.

Smart always gets the defensive assignment against the other team's star player - and he truly gets into their heads. Smart's tenacity on the defensive end is his calling card, and that is one reason why I never wanted to picture him going to another team and defending his former Celtics teammates. That didn't happen, and Ainge made another solid deal by inking Smart to the four-year deal at bargain money.

As the Celtics are 3-1 on the young season, should Smart, who's always been a fan favorite since his arrival in Boston, be considered for the team's vacant captain spot?