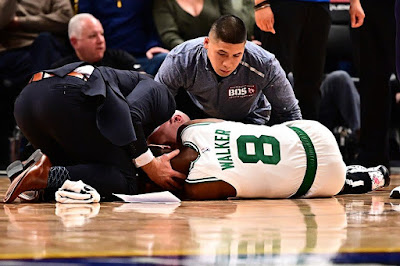 Celtics point guard Kemba Walker collided with teammate Semi Ojeleye in the second quarter of Friday night's 96-92 loss against the Nuggets and was transported on a stretcher to a nearby hospital.

It was a scary moment at the Pepsi Center. Walker, who ran into Ojeleye's abdomen, fell to the ground and was laid motionless before he was immediately treated. After his evaluation in Boston Saturday, Walker has been diagnosed with concussion-like symptoms and didn't suffer from any significant injuries.


Kemba Walker was taken off the court in a stretcher after this play pic.twitter.com/i1jcJeoDwB
— Celtics on NBC Sports Boston (@NBCSCeltics) November 23, 2019


Celtics head coach Brad Stevens couldn't offer an exact diagnosis when he spoke to the media moments after the game Friday but did mention Walker's initial scans were positive and reminded reporters how scary the injury was for his All-Star point guard, teammates and the Nuggets' players.


"It's tough on both teams to see that," Brad Stevens said. "It was good to get at least early reports of good news from our standpoint but the head injury thing is super scary so you're always thinking about it and you still have to play the last 27 minutes -- which is not a fun part of it but I thought our guys and Denver competed really hard the rest of the game."

In the midst of an 11-0 run, the Celtics came close to erasing what was once a 19-point deficit but came up short down the stretch as they dropped their second loss in three games. Boston closed out its five-game road trip with a 2-3 record.

Looking ahead to his team playing without Walker for the foreseeable future, Stevens talked about team leadership from guys like Jaylen Brown and Jayson Tatum and how important it will be moving forward.


"Everything they do is valuable but they're not in a lot of ways (young) anymore and we need them to be playing like veterans in a lot of ways," Stevens said. "I think what this does is it shows those other guys -- Carsen Edwards, Grant (Williams), and Javonte (Green), VP (Vincent Poirier) and the new guys, it shows them who you're around and that's a good thing."