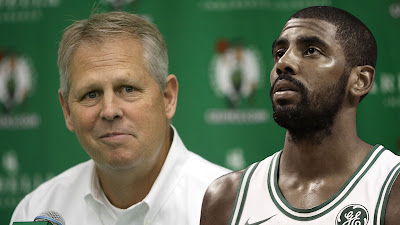 Celtics are 11-3 to start off the 2019-20 season, a far cry from where the team was a year ago when Kyrie Irving led the roster.

But don't ask Danny Ainge if Boston fans have forgotten let alone forgiven the now Nets' All-Star point guard for not only jetting to Brooklyn this summer as a free agent, but also placing much of the blame for the Celtics disappointing 2018-19 campaign on Irving in the first place.

Fresh off of watching a tough overtime loss to the Clippers, the Celtics president of basketball operations made his weekly appearance on Boston's 98.5 Sports Hub to discuss the team's west coast road trip and of course the potential return of Irving to the TD Garden next week.

Though it's obvious that it isn't a matter of if Celtics fans will boo Irving, who is currently out with a shoulder injury, but instead how loud will the boos rain from the Garden faithful on the eve of Irving's favorite holiday.

Ainge expressed how he'd be disappointed if that were indeed the case, especially if that followed a video tribute to Irving.

Though it's not clear if the team will have a video tribute awaiting Irving to begin with, but Ainge did agree that he does deserve one and that it's also not his call when it comes to those types of things. He also still maintains that Irving should not be looked at as the sole scapegoat for how last season turned out for the Celtics.


"It was a very good situation with Kyrie," said Ainge. "Kyrie was in a good place and things were looking good for a year and a half, and it went sour. And you've heard me say this, but he's blamed for a lot of the sour last year and I think it's much, much bigger than that.

"I don't have any grudges against Kyrie. I'm grateful that he gave us a chance, and it didn't work out. It wasn't his fault it didn't work out, it was a lot of people's fault, including my own." [Boston Globe]

While Ainge's stance has not changed since the offseason on how he feels about Irving and his time in Boston, it should be interesting on how this plays out, especially if the Nets guard doesn't even show up next Wednesday night.

It's also a good reminder to bring up of the fact the Ray Allen played five seasons in Boston and helped the Celtics win their only championship in the last 33 years, only to get booed by fans in his return to the Garden when the then free agent took his talents to South Beach to team up with LeBron James.

The Celtics face the Nets with or without Irving in a home and home on Thanksgiving Eve at TD Garden and Barclays Center the Friday night after Turkey Day.