Kemba Walker off to a good start with Celtics 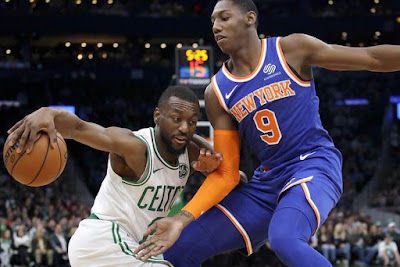 After a tough season opener against the Philadelphia 76ers, Celtics guard Kemba Walker has been on a tear with his new team.

In the Celtics loss to the Sixers, Walker managed only 12 points on 4-of-18 from the field, including 1-of-6 from 3-point land, to go along with two rebounds and two assists. Since then Boston has won four games in a row, with Walker setting the tone for his teammates while scoring at a high clip.


The All-Star guard has also hit 28-of-29 free throw attempts in the last two games and becomes the first Celtics player since Paul Pierce in 2002 to have at least 30 points, five rebounds and four assists in three consecutive games.

While Jayson Tatum might have hit the game-winner against the Knicks at home, Walker was happy to have one of his teammates take the last shot


"I probably would have took that a lot of times back in Charlotte," Walker said, "but yeah, I mean, I don’t mind. I like having other guys being able to take that shot."


In five games, Walker is averaging 26.2 points, 5.2 rebounds, 3.8 assists and a steal, as the Celtics have a 4-1 record to start the season. Its fair to say once again it looks like Danny Ainge's acquisition of Walker has been a good one so far.